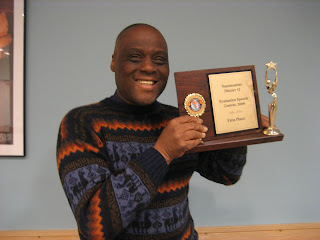 I've won many public speaking awards, but never in the Spanish language before a Spanish-speaking audience. Most of my Spanish communication has been one-on-one where I feel most comfortable.

Especially to someone who cannot speak English. Bilingual people make me so nervous that I tend to forget simple words in Spanish.

Once I was being interviewed for a job by two people who happened to be Spanish speakers. They saw on my résumé that I studied Spanish in Cuba and Perú, and that I've provided services to Spanish-speaking people in the past. Well, not surprisingly, one of the interviewers asked me a question in Spanish. I started stumbling over my words until I broke down and gave them my fluently rehearsed response in Spanish: I speak better Spanish with those who cannot speak any English. Bilingual people like you make me nervous. They looked at each other and laughed but were quite impressed

My limited experience in speaking before larger Spanish-speaking audiences began in Cuba when I was attending an orientation at the University of Havana's Spanish School for Foreigners. There was a large delegation of tutors listening to each of us give one to two-minute presentation on who we were and why we were in Cuba. Obviously, I did pretty good because I made everyone laugh with my punch line.


Never apologize or make excuses for anything you may or may not have done in public speaking. Ninety-eight percent of the time, the audience won't know the difference.

My second experience of public speaking before a Spanish audience took place when I was working as a vocational specialist at Arriba Juntos, a Latino-run job service agency. I voluntarily took the assignment of teaching a résumé-writing workshop, in Spanish, to Spanish-speaking immigrants feeling this will help improve my Spanish----it did. It was great to receive a letter from the program's director commending me on my performance. But years went by before I was asked to give another presentation, which is at my current place of employment where we also have a large Spanish-speaking clientele.

This assignment was basically on a short notice. On any public speaking assignment, I like to be thoroughly prepared. However, I was able to organize a good, informative workshop. The mistake that I made, and I should have known better being that I'm in Toastmasters, is that I told this monolingual Spanish-speaking audience that my Spanish was whack, and that I will be learning Spanish for the rest of my life (which is true; it takes years to master a language). I asked them to be patient with me while I share some important information about their job search.

In Toastmasters, we learn not to apologize or make excuse for anything we do or don't do in public speaking. Ninety-eight percent of the time the audience will not know the different because the are more interested in your message. In the end, we all had fun, and I even made them laugh a few times.


They all thanked me for my time, and the next day I got an e-mail stating how much they enjoyed my presentation.
Posted by W Bill Smith at 9:54 AM