Racial Prejudice of a Latino-American Immigrant 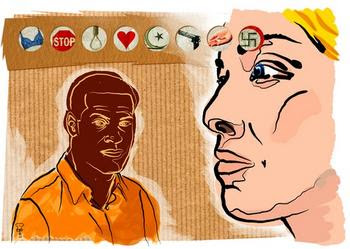 It never ceases to amaze me how people of color can consistently exhibit the same racial prejudice that has been historically practiced against themselves by non people of color. I have to admit, I've observed the same stupidity among some African-Americans. However, Emilio, a co-worker of dark-brown complexion from the South American country of Ecuador is obviously not too fond of African-Americans, despite the good working relationship he has with three of us in our office. It took an out-of-office company activity for his prejudice to show.

One Friday morning, he and I were sharing a ride with Samantha, a white-American co-worker driving to a company-sponsored event. We were riding through an African-American community in what is known as Deep East Oakland. This is when Emilio began making snide remarks about “the ghetto.“ Although, I felt uncomfortable with his racially charged comments, I kept quiet because I've heard similar sentiments from professional and working class African-Americans. Emilio even expressed surprise to see a public library--a library that I myself once patronized. Then as we passed another library, inside of a beautiful building, Emilio asked why this community has so many libraries when “these people don't read!”

Emilio asked why does this community have so many libraries when “these people don't read!”

Now, it was my time to vent, considering that I grew up in a black ghetto and spent more than my share of time in libraries; libraries filled with black patrons, I might add. I explained to him that not everyone in the black community are gangsters. It's the people who patronize libraries, especially as children, who generally end up leading productive lives; regardless of color.

I myself grew up in “the ghetto” and spent more than my share of time in libraries filled with black patrons.


I believe that Emilio felt because I speak some Spanish, travel to Latin-American countries, and like Latin music that, perhaps, I'm not black enough to be offended by his culturally insensitive remarks. Samantha, the white driver, immediately changed the subject to keep the discussion from escalating into heated argument. Although, I have no intentions of going into the black militant tirade that Samantha may have feared, I reported the incident to the management of our company under the conviction that, considering the communities our company serves, that sensitivity to race, culture, gender, or sexual orientation is paramount. In addition to reporting the incident, i suggested that we should all take sensitivity training to heighten our awareness.

He came into my office offering an apology, but could not explain why he would make the statements we made. Personally, I think he was just afraid for his job. Being that we both like our jobs, and management wanted to overlook the issue, I considered our discussion to be a truce, letting him know that I see him as prejudiced against African-Americans.
Posted by W Bill Smith at 8:13 AM