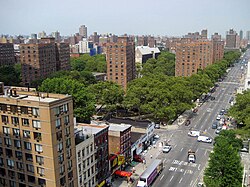 In my first trip to Perú in 2005, I took an Advanced Spanish class at El Sol-Escuela de Español (The Sun Spanish School) in Lima where I never spoke a word of English, primarily because none of the instructors speak English. This was a language immersion program where you cannot fall back on your English, which my opinion, is “the best” way to learn to speak a foreign language. One of my teachers, however, remarked that she thought I was Puerto Rican because of my accent. Of course, this did not surprise me because I've heard this comment on numerous occasions from Spanish speakers living in the US. Even when I was visiting Ecuador, a cab driver asked me if I was from one of the Spanish-speaking countries in the Caribbean where the island of Puerto Rico happens to be located.

However, Myrna, a former co-worker who comes directly from Puerto Rico emphasized to me strongly with a pointed finger that I sound more like a “Nuyorican,” that is, a New York Puerto Rican. I was in a recent phone conversation with Jenny, an old college classmate from New York's Lower East Side who herself happens to be Nuyorican. After she heard a bit of my Spanish, she too told me that I sound just like somebody from uptown. In New York City lingo, that means that I sound like someone from Harlem; more specifically, Spanish Harlem. She was right on point because I grew up on the border line of East and West Harlem, and walking distance from Spanish Harlem, which at that time contained a huge Puerto Rican population.

In elementary school, I used to hang out at my best friend's house, Carlos, also a Nuyorican, where every day I would practice my Spanish with his family. His mother even invited me to her church in Spanish Harlem so I can be around more Spanish-speakers. At the age of 16, I started getting into Latin music, specifically the commercialized Latin Soul Music by musicians such as Joe Cuba, Pete Rodriguez, and Joe Bataan, and eventually got into deeper Latin music with such artists as Ray Barretto, Eddie Palmieri, and Willie Colón of whom all, with the exception of Joe Bataan, are Nuyoricans. Joe Bataan himself is half Filipino and half African-American, but grew up in New York's Spanish Harlem.