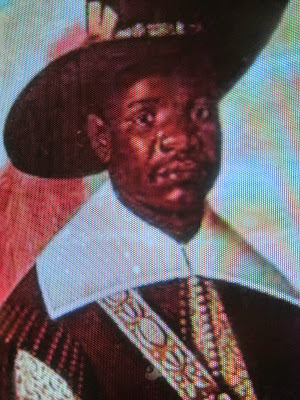 The original inhabitants of what is now known as Los Angeles, California included Mexicans of African ancestry. This may sound astonishing to even many Mexicans and Mexican-Americans, not to mention many of my fellow African Americans.

Black people have been in Mexico since the 1500s when slave ships docked in Mexico's Port of Vera Cruz, and the slave traders distributed the African slaves throughout Mexico and Central America. In fact, there was a time when Mexico City had more Africans than Spaniards.

Although, there is still populations of Afro Mexicans in Mexico's states of Vera Cruz, Tabasco, Guerrero, and Oaxaca, the large historically black population did not simply disappear; over a period of 500 years, they intermarried with the Spanish and the indigenous.

At a local restaurant that I frequent, there are Mexican workers from Mexico's state of Guerrero whom you can tell have some African ancestry even though I doubt that they would be willing to admit it. When I attempted to discuss with them the history of their home state where Mexico's first black president, Vicente Guerrero, was born; with a smile, they gave me a friendly, polite brush-off.

However, when I speak of Mexican history, I would be remiss to not remind you that before the USA was born, Mexico included what is know known as the State of California. The following article is about the original inhabitants of Los Angeles, California where two of them were black Mexicans.

Site of the original article

The Los Angeles Pobladores, or “townspeople,” were a group of 44 settlers and four soldiers from Mexico who established the famed city on this day in 1781 in what is now California. The settlers came from various Spanish castes, with over half of the group being of African descent. SEE ALSO: Frederick Douglass Escaped From Slavery To Freedom On This Day in 1838

Governor of Las Californias, a Spanish-owned region, Felipe de Neve called on 11 families to help build the new city in the region by recruiting them from Sonora and Sinaloa, Mexico. According to a census record taken at the time, there were two persons of African ancestry, eight Spanish and Black persons, and nine American Indians. There was also one Spanish and Indian person, with the rest being Spaniards.


According to the efforts of historian William M. Mason, the actual racial makeup of the pobladores was perhaps more racially balanced than not. Mason wrote that of the 44, only two were White, while 26 had some manner of African ancestry and that 16 of the group were “mestizos” or mixed Spanish and Indian people.

Black Mexicans Luis Quintero and Antonio Mesa, the only two named on the 1781 census, married mixed women and bore several children between them. The pobladores founded the city “El Pueblo de Nuestra Señora La Reina de los Ángeles sobre el Río Porciúncula” (Spanish for The Town of Our Lady Queen of the Angels on the Porciuncula River) that day, after some priests found the area 10 years prior. Another historian, Dr. Antonio Rios-Bustamante, states that Los Angeles’ original settlers were even more mixed than the census stated, but was that African, Indian and European ancestry was a hallmark.

In Los Angeles, the El Pueblo de Los Angeles State Historic Park honored the pobladores in the 1950s with a plaque, but it was mysteriously removed. In a Los Angeles Times report, it was suggested that the removal of the plaque was racially motivated. However, in 1981 during the city’s bicentennial, the plaque

D.L. Chandler is a veteran of the Washington D.C. Metro writing scene, working as a journalist, reporter and culture critic. Getting his start in the late 1990s in print, D.L. joined the growing field of online reporting in 1998. His first big break came with the now-defunct Politically Black in 1999, the nation's first Black political news portal. D.L. has worked in the past for OkayPlayer, MTV News, Metro Connection and several other publications and magazines. D.L., a native Washingtonian, resides in the Greater Washington area.