Do Latinos Not Recognize Their Own Racial Diversity? 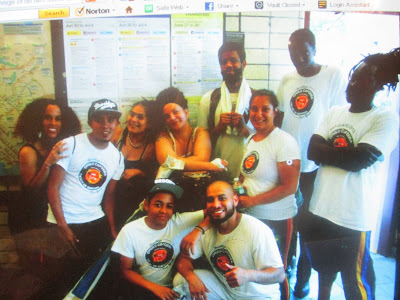 I had just returned from a five-nation Latin-American tour where my level of Spanish fluency climbed a few notches, seemingly by default. Before heading home to Oakland, I stopped in New York City where I grew up to visit my brother who lives on the Upper West Side of Manhattan and a cousin who lives in the South Bronx.

One night, as I left my cousin's house for the subway station, I came across some guys speaking Spanish with a Puerto Rican accent. Suddenly they stopped talking and looked at me with some concern, seemingly hoping that I was not packing a weapon with intentions of robbing them. After all, this was the South Bronx!  Because they were already speaking Spanish, I politely said, con permiso (excuse me), as I passed. One of the fellows responded in eloquent English—certainly!


With New York having such a large Afro-Latino population, how did this gentleman know that I was not Afro Latino prompting him to respond to me in English? It seems to me that many (not all, thank goodness) Latin-American people here in the U.S. are oblivious to the racial diversity in their own communities.

In response to one of my blog posts entitled, So Few Latinos of Color on Spanish TV, a Latino who goes by the name of Chaz Perez made the following bigoted comment:


* Give it a break! There are enough black faces on U.S. television to satisfy the world's demand for black faces on television. How many Hispanics or Asian faces do you see? Yet, are we crying? You Jessie Jackson, Al Sharpton, and Barack Obama keep the U.S. happy and in black faces. Don't worry about us.

*I had to edit his writing for grammar and spelling for his verbiage to make any sense.

What this person obviously overlooked when he asked me how many Hispanics or Asian faces do I see on U.S. TV is that many Hispanics are black as well as Asian. He appeared clueless to the fact that real Hispanics come in all colors and represent various ethnic groups. I also explained to him that the black faces we see on TV include Afro Latinos who are locked out of the Latin-American television industry, which consistently caters to those of European persuasion.

One evening I was coming from an Afro-Peruvian dance performance,  and I ran into an black friend whom I have not seen in a couple of years. Immediately, we greeted each other in Spanish. I then noticed two olive-skinned guys who appeared to be Latino freaking out and looking at us in astonishment, not taking into consideration that the black man I was speaking to is also Latino; a Peruvian who speaks limited English. Why was our Spanish conversation so entertaining to them?


While vacationing in Lima, Perú, I ate at a Chinese restaurant known as a “chifa,”  and had some of the best Chinese food I ever had. If I had not ordered in Spanish (or Cantonese), I would not have been fed. In Higuerote, Venezuela, two hours from the nation's capital of Caracas, I went shopping in a meat market owned by Middle Easterners. After surprising them with my basic Arabic, I began placing my order in Spanish; otherwise, I would not have been served.

I have personally met Latinos who are Jewish, black, Asian, white, indigenous, Middle Eastern, and of course, a mixture of various races. If a “gringo” like me can see the racial and ethnic diversity in the Latin-American community, why is it that so many born and raised Latinos are deprived of such awareness? Is it Spanish television like Univisión and Telemundo, or Spanish newspapers like El Diario in New York City and La Opinión in Los Angeles, California that fail to represent Latin America's realistic diversity?
Posted by W Bill Smith at 2:27 PM