Black Bolivians Jam to their Own Form of Rhythm & Blues 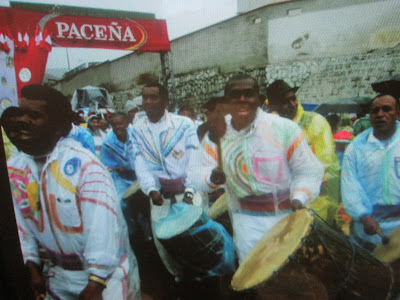 Black Boliva has been on my list of places to visit for quite a few years. The closest I came to entering Bolivia was during my trips to Ecuador and Perú where all I had to do was cross the border. As a budget traveler, I find ways to visit nearby countries of the countries I'm visiting, usually for a few days.

However, Bolivia is a challenge because of their high visa fees. Why pay nearly $200 to cross the border and only stay a few days? However, thanks to my Afro-Bolivian Facebook friends, I will find a way, and once I do, I will have some friendly contacts who can show me the ropes.

The black music of Bolivia is known as Saya. It is inspiring how the Afro-Bolivian community uses their traditional music, their own cultural form of rhythm and blues, as a manner of resistance and empowerment in a racist society.

There is a film coming out that explores what is rarely told in history books of how black Bolivia's African ancestors came to the colonial region as slaves, and goes on to explore the resilience of Bolivia's black community today, and their culture and their tradition of Saya music and dance. It is their movement for recognition in the world.

The Saya music of Afro-Bolivians comes from the word, “nsaya.” It is from the Kikongo (Kongo) language in the are of the African continent now known as the Democratic Republic of the Congo and Angola. It is an art form of traditional Andean and Afro-Bolivian music and dance which originated in the jungles of the predominately black Yungas areas of Bolivia's Department (State) of La Paz.

Today, Afro-Bolivians have use Saya music and dance in their struggle to reclaim their rights within Bolivian society. In this movement, the Saya has functioned both as a way of expressing and solidifying black Bolivians, and as a way to express their identity in the context of national social movements based on ethnic identities.