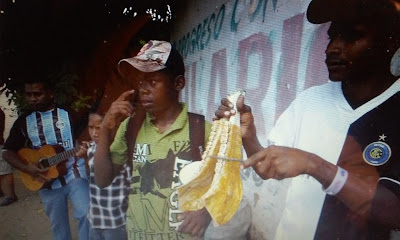 
I lived and worked around Mexican Americans for many years, and only met a few who knew anything about the racial diversity of their own heritage. To so many of them, a black person speaking Spanish is considered humorous and freaky. They know nothing of the black folks who are more “Mexican” than they are; meaning they were born and raised in Mexico, and know only the Spanish language and Mexican culture versus living in the U.S. as bi-cultural.

Recently, as a preliminary count before the 2020 national census, the Mexican government, for the first time ever, recognized its 1.38 million citizens of African descent in a national survey. In 2020, “Black" will debut as an official racial category.

A major force behind the government's recognition was a black activist group known as México Negro, founded in 1997 by Sergio Peñaloza Pérez, a school teacher of African descent working unceasingly to increase the visibility of Afro-Mexican culture.

Cuajinicuilapa, on Mexico's west coast, is one of the major black communities of Mexico located in the La Costa Chica region in the southwestern states of Guerrero and Oaxaca where the Afro-Mexican population is concentrated.

Mexico's post-revolutionary government made a conscious effort to create a national mixed-race identity that melded Hispanic, indigenous, and African ethnicities. Article 2 of Mexico's 1917 Constitution recognized its "multicultural composition," and today, over 60% of Mexicans identify as mestizos.


One of México Negro's strategies going forward is to ally the black rights movement with indigenous rights, which are generally more widely recognized. In 2013, leaders from 26 indigenous communities released a statement pushing for constitutional reform that addressed the rights of both indigenous people and Afro-Mexicans.

In 2016, México Negro's most important outreach effort will work on having elementary and high schools include material on Africans and people of African descent in school curriculum. On the university level, there will be a professorship launched at the Benito Juarez Autonomous University of Oaxaca to study Afro-Mexican women.


In addition to increased visibility in textbooks, a documentary filmmaker in Mexico City plans on increasing black representation in film and media. Citing the handful of famous black Mexicans who are few and far between on the national stage. Darkness has a negative connotation, and Afro-Mexican youth have no icons. It seems like their only options are to immigrate or be delinquents.