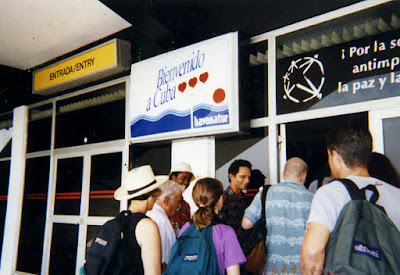 Arriving at the José Martí Airport in Havana,
Cuba to be processed by immigration

Since my trip to Cuba years back, I heard accounts from other African Americans who visited the island who had a different experience than I when it came to experiencing Cuban racism, and I truly believe that it had more to do with my own intentions and perceptions.

For example, there are heavily populated tourist areas in Cuba, such as Varadero Beach with all of its fancy hotels, where black Cubans are not allowed without having the proper identification. Black American and black Canadian tourists who are often presumed Cuban have been stopped by the police having to present their passports before entering when their white American and Canadian counterparts strut right through unnoticed. 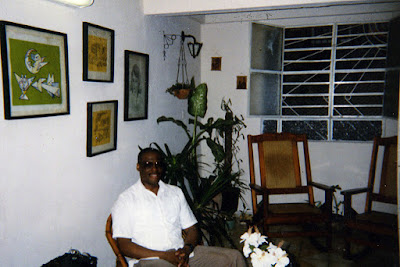 At my homestay in Havana's El Vedado District

At the popular Varadero Beach, for example, an undercover cop snatched a well-traveled African-American female tourist thinking she was a prostitute and started screaming in her face. When the officer saw her hotel bracelet, he suddenly became overly apologetic. This woman has traveled all over the island, Holguín, Trinidad, Santiago de Cuba, and each time, she was prejudged and stopped; once even in the company of her parents.

During my trip, I made it a point to separate myself from my American. Canadian, and European classmates who were undergoing Spanish language intensive training at the University of Havana to immerse myself into the Afro-Cuban community. I wanted as much as possible to live Cuba's black experience, including the racism, as part of my language and cultural immersion.

Interestingly enough, once Cubans who very quickly realized that I was not Cuban, whatever racism they initially wanted to exhibit was kept in check as I was suddenly perceived differently. And the black Cubans immediately saw me as a well-to-do American first and a fellow black man second. 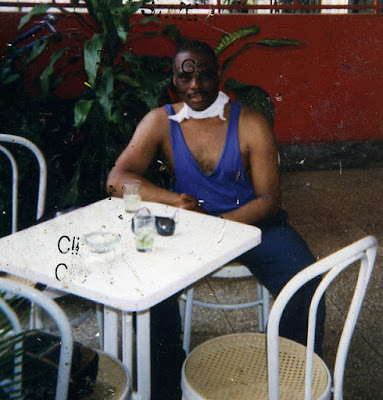 However, Global Exchange, Inc., the agency that sponsored my trip legally in partnership with the University of Havana  assigned me to a non-black Cuban family for my home stay.
Although the family was very cordial, I noticed how they kept their social and family circles free of black people. My white roommate was given special treatment that was not given to me. Yet, I was not the least bit offended because my purpose for being in Cuba, besides improving my Spanish, was to connect with the Afro-Cuban.

Thus, I found it very flattering when I was presumed Cuban on sight by local citizens consistently mistook me for being one of them. Vladimir, a black Cuban neighbor of mine when I lived in Oakland, California, chuckled when he told me that when I arrive in Cuba, everyone will think that I am Cuban until . . . I open my mouth. Although I can speak the language, my accent is hopelessly non-Cuban. 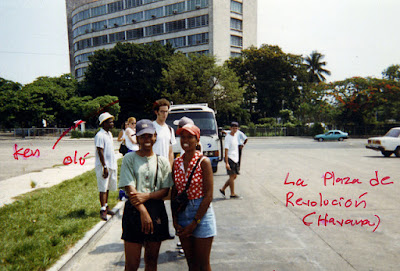 My new friends, Ariana and Nairobi, at the Revolutionary
Plaza where Fidel Castro gave live speeches

As I passed through a housing project, a black woman was in utter shock when she overheard me speaking Spanish with my thick foreign accent. Even though I acknowledged her with a smile and friendly eye contact, her stunned reaction remained intact. It never occurred to her that I was a visitor from another country. She thought that I was a fellow Cuban acting a damn fool. There were many others; however, who were open minded enough to ask me where I am from, then shake my hand saying, “nice to meet you” when I tell them that I am from the U.S. 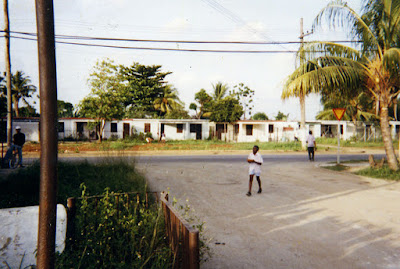 
It was interesting how another African-American visitor to Cuba pointed out that because of his color, he could easily blend into the crowd while his fellow white exchange students are targeted on the street by tourist traps and hustlers.

In contrast, I experienced my share of being targeted during my first three days in Havana because I made the mistake of wearing designer shorts, designer sunglasses, and a battery-powered plastic fan around my neck. Finally, an Afro-Cuban friend pulled my coattail and advised me to dress normally, i.e., as a local would dress, and it will not be assumed that I am a wealthy visitor from a foreign land on vacation.

Ronaldo, a black bicycle-taxi driver who taught me Cuban ghetto-slang, conspired with his friends to capitalize on my exuberant black-on-black connections by having me spend money on booze and food at a bogus birthday party for a supposed niece. Earlier that day, Ronaldo introduced me to one of his friends who, in retrospect, gave me such a bright smile appearing highly pleased they got themselves a real mark, a "brotha" to boot.

Fortunately, I met a woman and chose to run with her instead, not realizing how much trouble I inadvertently avoided. Ronaldo was visibly upset when he came by my home stay with his carload of friends to pick me up. Some neighbors, very much concerned for my welfare, pulled me aside explaining that those guys are jineteros (pronounced “hee-nay-tay-doze”) who specialize in taking advantage of tourists, and warned me to be careful of the friends that I make. 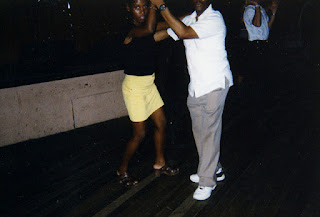 Dancing with my date, Denalys Fuentes, at
the Hotel Riviera's Salsa Palace

Overall I met far more good, respectable, and down-to-earth people than bad. Having traveled to over 150 cities in three continents, Havana, by far, will always be my most heartfelt, memorable travel experience.

It was pure joy walking the streets of Havana hearing the musical sounds of son-montuno, charanga, and timba blaring from cars, homes, and businesses. A Cuban woman and I could not resist grabbing each other to dance openly as we passed through a busy public square in Central Havana to the sounds of salsa music.

I loved the Cuban people with their high-volume cultural energy so much that I fought back heavy tears on my way to the airport to return to the U.S. I felt there was a lot more to Havana, and Cuba at large, that I was missing and needed to experience. All I can do now is sing the chorus of a song by the salsa music icon Willie Colón: “Pa' La Habana, voy a volver algún día; volveré—To Havana, I Shall Return Someday!
Posted by W Bill Smith at 11:29 AM