Thoughts of Defecting to Cuba! 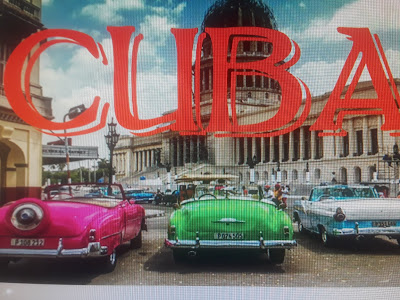 Long before President Obama reopened diplomatic relations with Cuba, I arrived on the island legally by permission of the U.S. State Department to attend a Spanish language intensive training at the University of Havana. On my first day there, I had thoughts of defecting from the U.S. and becoming a Cuban citizen. I was so overwhelmed by the weather, the beautiful women, and the folksy, down-to-earth demeanor of the people; not to mention what I considered a heavenly world of salsa and Cuban music that passionately moved my soul. Being in a whole new Afrocentric world, I was rebellious and in love with Cuba.

However, I was recently listening to a song by singer Gloria Estéfan, Oye Mi Canto (Hear My Voice). The words alludes to her feelings about the current Cuban government and its effect on the people giving me a realistic, ambivalent reminder about the land I fell in love with.

Estéfan who herself is Cuban born knows the side of Cuba that we visitors who flock there like birds having the time of our lives do not see or even care to see. People do not have the right to speak their minds as the Cuban government dictates what is right and what is wrong. They assert only one way—the Cuban way in the name of the revolution. And that revolution, they say, is eternal. Anyone who openly expresses their dislike of Castro the way so many Americans express their dislike of Donald Trump would be expeditiously imprisoned. Cuban nationals do not have the freedom to speak out orally or in writing or read literature not government approved.

Francisco, one of many black Cubans who happily left Cuba for the U.S. through the 1980 Mariel boatlift, told me that had I defected, Cubans on the island would have been surely hating on me. They would view me as a damn fool because so many Cubans long to be in my shoes to the point of risking their own lives on rickety rafts, sailing through rough, shark infested waters, to escape Cuba for the U.S. He added, unless I was a revolutionary like Huey P. Newton or Assata Shakur escaping political vengeance, Cuban people would have never understood why I would make such a stupid-ass move. 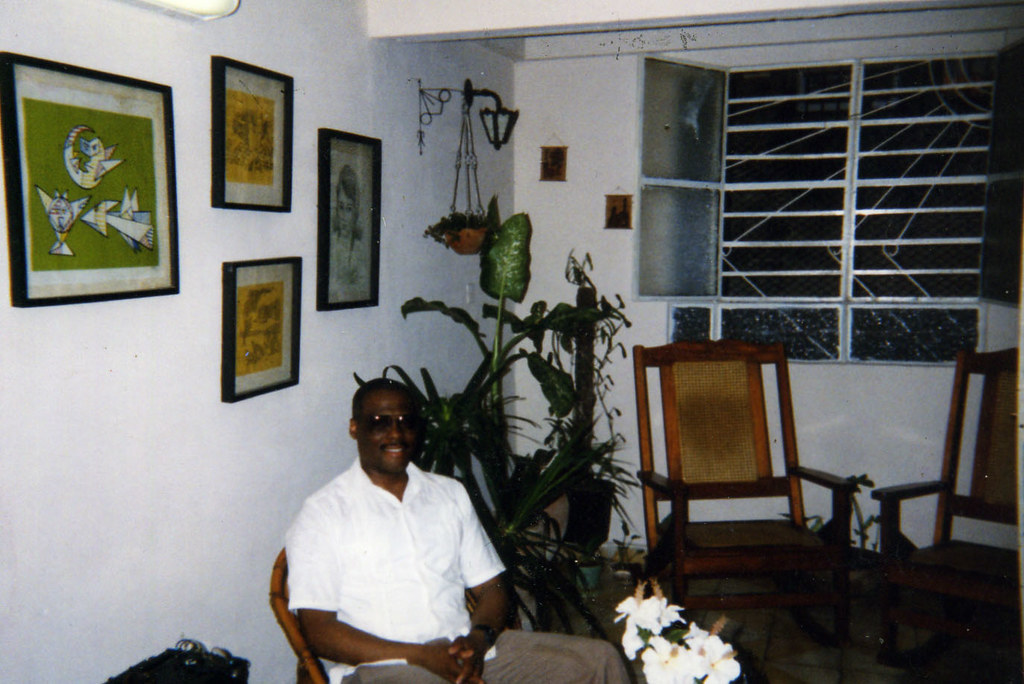 In the living room of my Havana homestay

In the beginning, it was primarily wealthy, white Cubans and only a sprinkling of black Cubans who fled the island, which lead me to the one thing I admired about Fidel Castro. He is the only Latin-American leader that I know of who stood up and spoke out against racism in his country. Since he took office, there has been a surge in the number of black professionals, many in the fields of science, technology, engineering, and medicine. But as decades passed, and a new generation of blacks, such as Francisco, grew up seeing that this so-called “revolution” has gotten them nowhere; thus, more and more Cuban blacks began to flee the island.

Upon my arrival in Havana, I befriended, Luisa, a woman whom I thought would help me get immersed in the Spanish language and Afro-Cuban culture. However, it was no more than a minute after she and I were alone when she begged me to bring back to the U.S.A. I was so blinded by my exhilaration with this new Cuban experience, which was off limits to the average American, I never bothered to inquire as to why she would want to leave. Instead, I told her that I preferred to stay in Cuba and help support the revolution. She did not respond, but looked me seemingly wanting to tell me, geez, if you only knew, bruh; if you only knew! 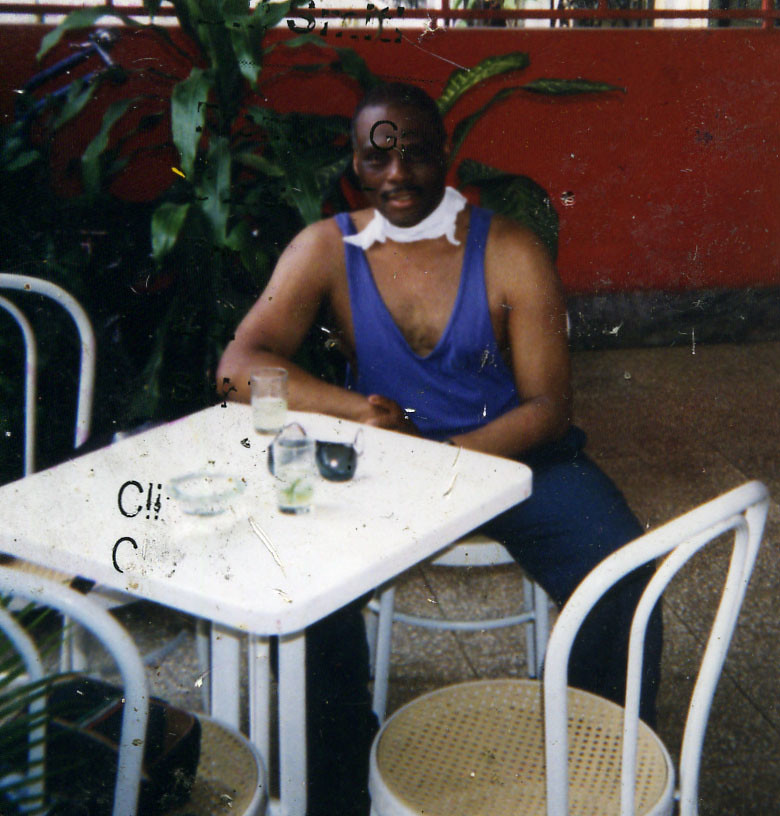 Chilling in the hot Cuban sun over a mojito, Cuba's national drink.

The poverty was evident as the average salary did not exceed $25 per month. Many professionals are forced to moonlight as cab drivers, entertainers, and hustlers to make ends meet. There were nights when I had nothing to do, and I would take Luisa to a local El Rápido restaurant, similar to Kentucky Fried Chicken in the U.S., where as far as I was concerned, we were just “kicking, it” in Spanish, but to Luisa, she was being well fed. With my American dollars, which at the time was exchangeable for 20 Cuban pesos per dollar, I was in the best of shape, and Cuban people treated me royally. But had I defected, run out of money, and had to survive on a Cuban economy, I too would have been very unhappy and ready to leave.

Upon my return to the U.S., many Cuban-Americans were highly upset with me for taking the trip and supporting the Fidel Castro regime. Lydia, a black Cuban woman pulled me aside and suggested that I read the book, “Hijack” by Anthony Bryant, a former Black Panther with a criminal record who hijacked a plane to Cuba in the name of the revolution and ended up spending 12 years in a Cuban prison for robbing the passengers, one of whom was an undercover, Cuban official. In his book, Anthony describes a Cuba that we visitors will never see or experience because the country wants the tourist dollars. He even described the Cuban prison system as one that would make U.S. prisons look like Five-Star hotels. However, when Bryant was finally able to return to the U.S., he was no longer a black revolutionary, but a right-wing republican.

Although, Castro made a gallant effort to crush racism in Cuba, racism persists to this day. In fact, a form of apartheid is practiced where black Cubans are required show IDs when entering popular tourist areas. Even black American and black Canadian tourists have been stopped and carded because they were thought to be Afro Cuban. Lydia also brought to my attention an Afro-Cuban civil rights leader, Oscar Elias Biscet, who was given a 25-year prison sentence for starting an organization similar to the NAACP in the U.S. He was eventually released under pressure from the UN and various international human rights organizations. 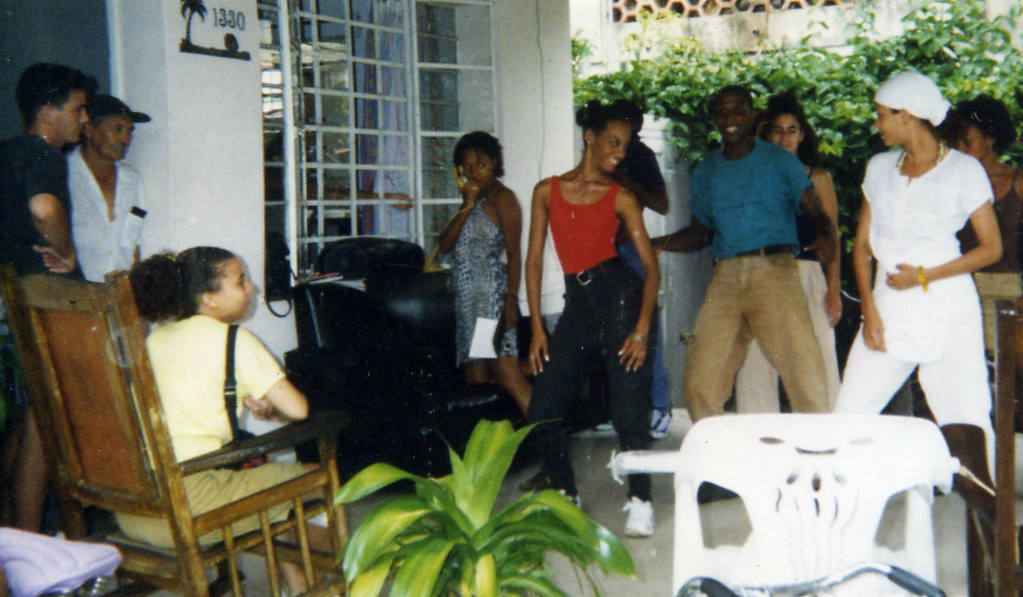 An Afro-Cuban (rumba) dance class on the porch of my homestay for American visitors.

Vladimir, an Afro-Cuban neighbor of mine who also escaped Cuba on a rickety raft connected me with his family back in Havana. However, when he saw the glow of joy on my face upon return, wearing my Cuban t-shirts and baseball cap and listening to Cuban music, all he could do was shake his head and laugh because he knew first-hand the despicable things I missed out on simply because I was only a visitor.

As I sit here writing this blog post years later, I declare that my love is for the Cuban people and not for the Cuban government. Thus, I trash all those wild thoughts of defecting to Cuba. Yes, the U.S.A. has issues, but here we can vote, protest, boycott, and write letters and other correspondence to make changes where such actions would not be tolerated in Cuba.

I truly believe that we who enjoy visiting Cuba should be thinking about what we could be doing to help every day Cuban people economically while we are there without breaking the bank. For example, when I gave Luisa's seven-year-old son a pad of writing paper and some ink pens, he was so thrilled that he high-fived me as though I gave him $50 bill.

We Americans also need to be pushing strongly for the end of the U.S. trade embargo against Cuba, which I saw first-hand how it is hurting innocent men, women, and children much more than it is hurting the Cuban government. We are talking about people who feel no animosity towards Americans, yet they are the ones bearing the major brunt of the Washington-Havana conflict.

To the land of Cuba and it's lovely people, I can only say to you:

Cuba, how beautiful are your countrysides,
how beautiful YOU are,
may your CULTURE live for ever and ever!
Posted by W Bill Smith at 12:14 PM