Sad Ending with my Afro-Peruvian Goddaughter 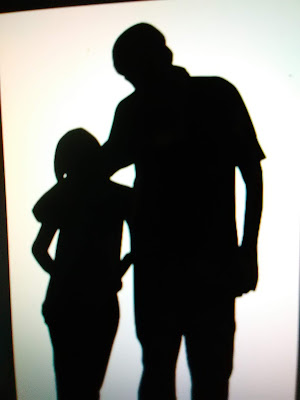 I was fascinated by a CD, "the Soul of Black Perú" that alerted me to this country's black population. And as a lifetime Spanish student seeking to learn about black cultures in Latin America, Perú joined my list of places to visit. Through my planing and research, I learned of a prominent black musical family in Perú's southern district of El Carmen that entertains and accommodates visitors wanting to explore the Afro-Peruvian community and its culture. My first trip took place in October 2005. 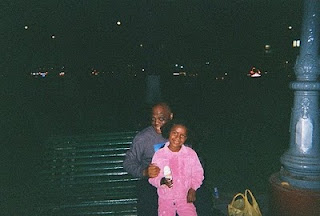 Daniela and I hanging out in Chincha Alta, Perú

This family took me in as though I were a long, lost cousin making it easier for me to mix with residents in the community. One evening, while in the living room working on my laptop, a sweet three-year-old wandered in from next door, and I offered her some sugarless candy that I brought from the U.S. Her name is Daniela, and suddenly, I was deeply struck by a strong, paternal connection. 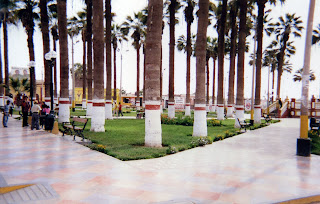 When she reached the age of five, Daniela asked me a question that has always been very dear to my heart; she wanted to know if she could be my daughter. I never met her father, but according to hearsay, he is quite a player running around with different women at will. In fact, I even met two of Daniela's half sisters fathered by this same man. 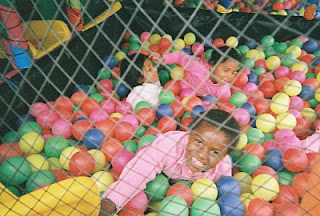 Daniela at an amusement park in Sunampe, Perú

Even while at home in the U.S., I would make calls to Daniela and her family and wire money hoping that she would benefit. As I made repeat visits to Perú, I would take Daniela and her family and playmates to dinners, amusement parks, and beaches. During her puberty, I taught her how to play chess, Monopoly, and Scrabble, and later bought her a bicycle. In addition to trying to get her started early in the English language, I made attempts to encourage her to develop her reading and math skills beyond grade level by purchasing children's books. 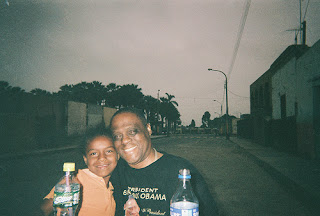 Daniela and I enjoying treats outside a local store

Unfortunately, because I live in the U.S. and she in Perú, I inadvertently missed far too many opportunities to be the influence in her life as I would have loved. Her mother sold the bicycle and all the other gifts and educational materials that I purchased for Daniela. Because of the marginalized educational system in this predominately black and brown community, her Spanish is now the equivalent of U.S. black "ghetto talk." Even though Spanish is not my first language, I quickly detected the poorly written messages she sends me through Facebook today as a teen. 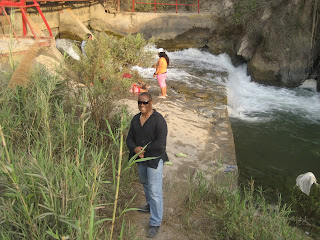 Relaxing at a local resort in El Carmen while Daniela's mother (background)
supervises the kids on the waterfront.

When Daniela turned nine I noticed a marked difference in her behavior upon my arrival in El Carmen. It was obvious that she was surreptitiously influenced by her mother or other family members to hustle me, i.e, capitalize on the tender spot that I have in my heart for her by having me purchase items supposedly for her and her little sister, but in reality, for her mother to "sell." I really wanted to help Daniela enjoy her childhood, but her mother kept getting in the way for personal gain. 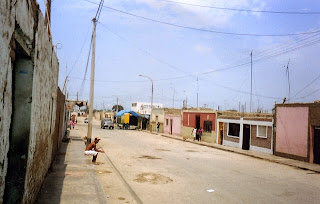 On Daniela's 15th birthday, I paid half the expenses for her Quinceañera, which is like the U.S. Sweet 16 celebration, but for 15-year-olds. Still trying to encourage her to think about her future as she rapidly approaches adulthood, I sent her pictures of successful black women, such as Muriel Bowser informing her that this is the mayor of our nation's capital. Indeed, she was impressed by her beauty as well as her status as a black female, but not enough to try to think about her own life and future. 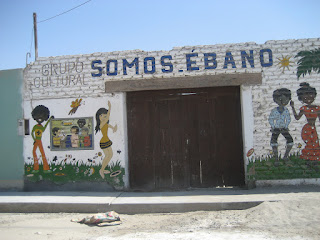 The sign reads, "We Are Ebony," at a children's community center.
El Carmen, Perú

I really spoiled Daniela's family! Today, as Daniela recently turned16, it has become blatantly evident that she is being used to withdraw an increasing amount of money out of me. Sadly, I caught Daniela in so many lies about her needs and wants and noticed inconsistencies and holes in her stories as she continues to come up with excuses to get me to wire more money, which of course, will go to her mother, and not to Daniela. 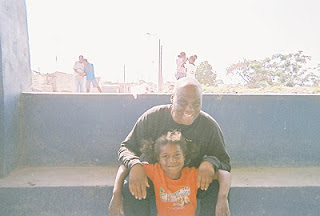 Daniela after an Afro-Peruvian dance class

A Peruvian-American acquaintance, told me years ago not to be fooled by all the love that I get from Peruvian people; "it's about the benjamins, moron," he insisted out of frustration. In some instances, he was right, but fortunately, I met others, such as the musical family who always gave me a place to stay never hitting on me for money, but treated me as a blood relative. They even cared for me when I got sick, and nursed me back to health. However, Daniela's family was different once they realized how much I really cared for her and were determined to take advantage. 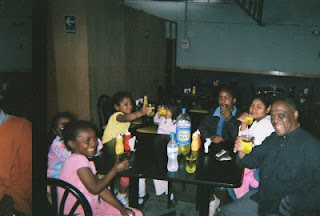 No way do I blame Daniela as I believe she truly desired and valued our father-daughter relationship. She is only a child and was vehemently sidetracked by loved ones into going for the benjamins, which is far beyond her control. It is sad, but I chose to cut off all communication with her and her family and simply move on with my life.