How To Fool Pickpockets When Traveling 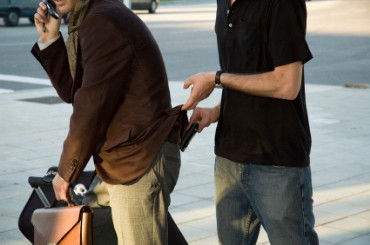 I wanted to use another “F” word besides ”fool” listed above, but I´m sure you get the message.


Upon entering Perú for the third time from neighboring Ecuador, I was accosted by a Peruvian National Police officer who wanted to see my documents. As I complied with his request, a couple of my expired credit cards and my old, expired passport fell from my back pocket. The cop asked me what those were about. He and my cab driver had a hearty, good laugh when I casually replied “son para los ratersos (they are for the pickpockets).” At a crowded bus station in Lima, a station attendant warned me about rateros. I laughed, pulled out my old, expired passport filled with fake Obama $44 bills, and everyone observing our conversation also joined in on the laughter.

During my five-nation trip to Latin America I had nice gifts for thieves and pickpockets, and souvenirs for the friends I made: Obama dollars sold by Amazon.com

It was through a published travel guide where I was warned about pickpockets targeting tourists. Naturally, after growing up in New York City, and having experienced travel to several other big cities in the U.S. and around the world, I've learned to hide cash in places I will not reveal here. I simply carry enough cash in my side pockets to get me through the day with a silk handkerchief directly on top in the event of a professional pickpocket making any attempt, and all that she/he would get is my silk handkerchief. And, yes, they got my silk handkerchiefs on two occasions. They also got one of my Barack Obama dollars that I purposely placed in my back pocket to see how good these pickpockets really were. I do not carry a wallet while traveling unless it is a wallet filled with funny money and old, expired credit cards. In future travels I will make it a point to carry a wallet strictly for “rateros,” filled with funny-money and fake credit cards.

In Cartagena, Colombia, I placed my old, expired passport in my back pocket. It was gone in an hour. I never felt anything strange going on until I randomly reached for my back pocket. This to me was my biggest lesson as to how skilled these pickpockets are. My current passport and cash were stored in much safer places.

Pickpockets generally operate on crowded buses, bus stations, markets, or streets, such as Avenida Gamarra (Gamarra Avenue) in Lima, Perú. Peruvians warned me telling me that the pickpockets are highly skilled with hands of silk. The first time I was on Avenida Gamarra, I was in a cab. The streets were crowded with one store after another for blocks and blocks.

My front pocket is always in layers. My spending money at the bottom, a couple of handkerchiefs over the spending money, and at the very top, fake, funny money.
Posted by W Bill Smith at 1:46 PM