The cool thing about long layovers during international travel is that you get a chance to see another country, free of charge. This seems to be a pattern with me when purchasing cheap flights on the web. With long layovers, I had a chance to see Costa Del Sol, El Salvador (7 hours), Guayquil, Ecuador (9 hours), Mexico City (11 hours), and Panama City (6 hours).

Most recently, I passed through Panama City's Tocumen International Airport on the way to Cartagena, Colombia. After clearing immigration and customs, which took about an hour, I still had another four hours left to go into town and hang out, and still make it back in time to catch my next flight. Airport security would not have let me leave had I told them that I wanted to visit the Panama Canal or some other relatively faraway destination because I would not get back in time. I only wanted to go to a nearby mall to get a quick feel of Panamá, sample some local food, browse the shops, and look at the women. 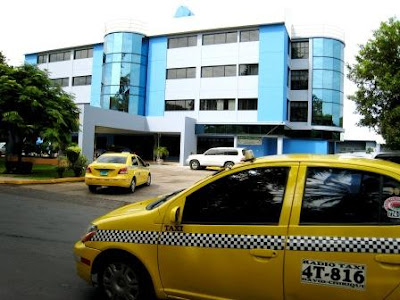 As in other Latin-American countries, this cabbie wanted to charge the gringo tax.

When I left the airport, I wanted to catch a bus to the mall, but was confused as to the location of the bus stop. An empty cab just happened to pass by and we agreed on a five-dollar fare. At the mall, I got to see a cross section of Panamanians doing their Xmas shopping. The people are much more racially diverse than I expected because an overwhelming majority of the Panamanians I've met in New York, where I grew up, and California, where I live, are black.

I was disappointed, however, that Panamá uses American dollars because. As a hobby, I collect dollars as souvenirs from every country I visit and put it on my office wall for display. The only unique currency I could bring back from Panamá was coins; coins which are strictly Panamanian. At the mall, I was humored to see Taco Bell, Wendys, and other fast food restaurants from the states. After my little trip to the Panamanian community, I decided to head back to the Tocumen Airport to make sure I didn't miss my next flight. I flagged a taxi, and immediately we began to haggle over the fair. I paid five dollars to get the mall, how come I have to pay $10 to get back. As in every country, I have to beware of the gringo tax.
Posted by W Bill Smith at 2:17 PM