A Taste of Colombia

Although I only spent five days in Colombia, Cartagena to be exact, I got a good first impression. First, it seemed that the Colombians are trying very hard to get over its bad rap. Secondly, because I'm an American, I was pleasantly surprised that I didn't have to pay a departure tax before my airline departure like I've had to do in other foreign airports.

I've even seen ads on television encouraging Americans to take a vacation in Colombia. Long before I decided to take the trip, I read scores of accounts on line about how friendly the people were and how much safer it is today than back in the day. Even a personal friend from Perú who passed through Colombia told me how warm the people were. I was discussing a possible trip to Colombia with my supervisor at work. When I asked about kidnappings, he waved my question off as if to say hell no; those days are over.

I felt very much at home when I first arrived at the Raphael Nuñez Airport in Cartagena, Colombia. There was a black presence everywhere. I was so pleased, I gave a black skycap a big tip for helping me with my luggage. It has been my lifetime goals to visit every Latin-American country to explore its African heritage while practicing my Spanish. I didn't think to ask him about getting to San Basilio de Palenque, a black landmark town approximately 40 minutes south of Cartagena where African slaves defeated Spanish forces to gain their freedom. San Basilio de Palenque is becoming a tourist attraction. I also didn't think to hire him as my private guide while he was off duty. It is much more economical to hire a struggling, hardworking citizen who can use some extra cash and knows the area than to hire a professional. I would have loved to meet people in the community, like i did in Ecuador and Perú, but five days were just not enough for such a fast and busy town like Cartagena. Central Cartagena I shopped, exchanged currency, and warded off hustlers.

Cartagena is a very fast town of 892,545 people. I found it to be all hustle and bustle. I really felt the pace of the city when I went into Central Cartagena to shop and exchange my money into Colombian pesos. There I felt I needed a big stick to ward off hustlers trying to get me to by their merchandise. One black guy kept pestering me to buy one of his necklaces. He seemed to have felt because we were “brothas” I should patronize him. Indeed I felt that way too, but I had no personal interest in jewelry. I had no wife or girlfriend to think about, thus there was no logical reason to buy. However, further down the street, I saw a black woman trying to sell food on a small makeshift booth by the curb. Although, she seemed to not get any business at all, I stopped to check out what she was selling--didn't like any of it, but gave her a 1000 peso tip and moved on. 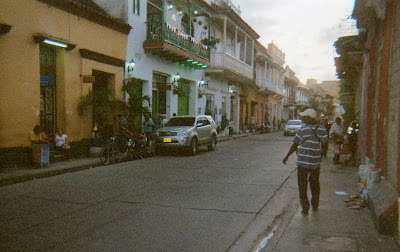 Cartagena's Getsamani District where I stayed.


Because of the rapid pace of the city, five days were not enough time for me to make any meaningful friendships. Everyone was simply trying to work, hustle and survive. People seemed to have much on their minds. One lady who worked in a restaurant near my hotel seemed interested in me but I don't know if that was a real attraction or if she was looking for a gringo to take her back to “America (see blog, “Marriage, I Don't Think So”). I know, this is my “stuff, ” but I didn't have time to worry about it. I was headed for Ecuador soon. That Friday night, before my trip to San Basilio de Palenque, I went out on the town in the Getsamani District, where I was staying, and decided to stop in a black bar, buy a local brand of beer, and hang out for a while. I was surprised not to hear salsa or cumbia music, both of which has its roots in Spanish and West African music (more specifically Yoruba), but Vallenato music. Later, I learned that vallenato music originated from Spanish minstrals (juglares) and the West African tradition of storytellers (griots).

While in Colombia I was functioning at 80% of my strength after having gotten very sick in Perú (see my blog “Travel Insurance Saved My Life”). I didn't do as much running around as I expected. My trip to the town south of Cartagena, San Basilio de Palenque. wore me out physically from walking all over town and having to ride on the back of a motorbike to and from the town, that I ended up going to bed early that evening before catching my flight to Ecuador.