Does This Village of Black Colombians
Have Money-Making Potential? 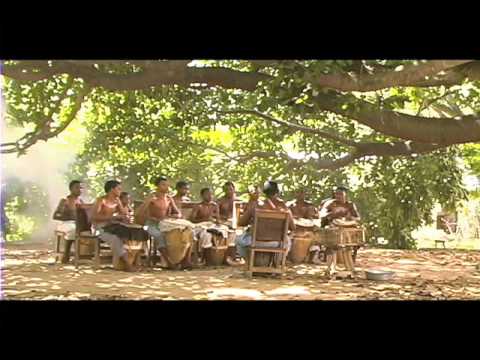 The people of this traditional Africa-like village, founded centuries ago by runaway slaves in the jungle of northern Colombia, about 40 kilometers south of Cartagena, live off the land, just like they did on the African continent. Their homes are made of straw, mud and cow dung. Electricity arrived in the 1970s as a government gift in recognition of the former world boxing champion Antonio Cervantes, better known as Kid Pambelé who was born here. Radio and television came soon after electricity. There is also a schoolhouse, named in honor of of the liberator of this village name Benko Biohó, which even has an Internet connection. The village is called San Basilio de Palenque. Their ancestors survived capture in Africa, the passage by ship to Cartagena, and were strong enough to escape and live on their own for centuries. The Colombian government takes some pride in this village because the people here were the first to free themselves from Spanish rule long before the nation we now know as Colombia did. I say “some pride” because the Colombian government is not doing much else for this town. 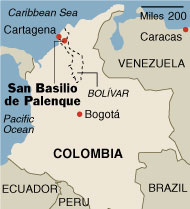 
I entered the village on the back of a motorbike and was dropped off at a restaurant across the street from Benko Bioho Square, containing the statue of the legendary liberator Benko Bioho. I had the traditional village meal of fish, rice, and plantains before my tour guide Carlos arrived . As Carlos escorted me around the village explaining its history and today's lifestyle, I kept wondering to myself, why don't these people capitalize on the growing interest in this village? The place is pretty, the weather is wonderful,and the village is peaceful with a lot to learn about the culture. I know, for myself, I would have loved to have taken home some souvenirs, like CDs of local artists, village post cards, or artifacts. I asked Carlos about this and he didn't give me much of an answer.

When I left the village and boarded a bus headed back to Cartagena, I saw two white women (I don't know if they were Americans or from another continent), hopping on the back of a motorbike, like I did, heading for San Basilio de Palenque. I was sure that this little African village in Colombia has money making potential to become a tourist attraction.

Chocó, in Western Colombia, holds the largest number of Afro-Colombians, which unlike San Basilio de Palenque are descendants of emancipated slaves.