Black Latinos Who Deny Being Black 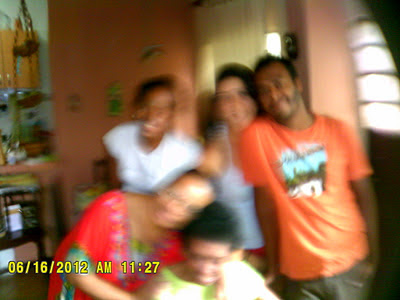 “You are a goddamn Negro! You think being Puerto Rican lets you off the hook? That's the trouble. Too many of you damn Black Puerto Ricans got your eyes closed. Too many goddamn Negroes all over this goddamn world feel like you do. Just because you can rattle off a different language doesn't change your skin one bit. Man, if there are any Black people up on the moon talking that moon talk, they are still Negroes. Get it? Negroes!”


Excerpt from “Down These Mean Streets” by Piri Thomas My goddaughter Daniela of Chincha, Perú
is the only Black in her family.

I was in Burger King conversing with a group of employees who happened to be Latin-American immigrants. We got into a discussion about their manager, and miraculously, I managed to contain an outburst of laughter when they told me that this manager was not Black. The manager and I had spoken before as I looked directly at her dark-brown complexion, her brown eyes, and her wide nose. The only difference between her and me is that I was born in a Black community of St. Louis, MO, and she was born in a Black community of La Costa Chica in Mexico.

I need to point out that this is not an issue with all Black Latinos. I have personal friends of Afro-Latino heritage who are Black and proud. I have Facebook friends from Puerto Rico and all the down to Argentina who celebrate their Black heritage. But for those who do deny being Black, I can certainly understand their confusion.

In countries where racism is swept under the rug and where interracial relationships and marriages were never outlawed as they were once here in the USA, but encouraged in an attempt to whiten the nation, it is very easy to view yourself by your culture first, and your race second--if at all.

My goddaughter Daniela is a perfect example. She is the only black in her family; and is well loved. She speaks only Spanish and her culture is Peruvian; the only culture she knows other than I who visit her once a year.

If she were to move to the USA where race is more clearly defined, Daniela has no reason whatsoever to detach herself from her culture and embrace a Black population that is foreign to her in terms of language, customs. and social norms.

However one evening, I was teaching Daniela to play chess, and I told her that I will take the black pieces because I am Black. She immediately tapped her arm and said she is Black too. I felt proud that she recognizes her identity. Of course, living in the hub of Afro-Peruvian culture, and next door to the family famous for Afro-Peruvian music and dance also helped her true identity as well.


In the Dominican Republic, dictator Rafael Trujillo, who ruled from 1931 until his assassination in 1960, told his black population that if they have one drop of white or Indian blood, they are not black, and they believed him.

A Puerto Rican woman out of Chicago told me that the term "black" only refers to African-Americans. I asked her if she has been to the Puerto Rican towns of Loiza or Carolina where there are still cultural and linguistic ties to Western Africa.

Instead answering my question, she lashed out at me with a tirade about my being a self-loathing African-American. I had no clue as to what she was belly-aching about. What I tried to remind her, assuming she is as educated as she says, is that there are black people of many different cultures who speak many different languages. In fact, globally speaking, African-Americans are a minority when it comes to the Black race.