A White comedian by the name of T.D Rice in the 1820s wore a black face dancing and grinning, and masqueraded as a happy sambo making mockery of African-Americans in theaters by behaving in the stereotypical coon fashion. TD Rice became known as Jim Crow, setting off the rave of the times--the black face minstrel shows.

Thanks to Afro-Peruvian human rights activist Mónica Carrillo, a similar racist TV show was taken off the Peruvian airwaves, which promoted negative stereotypes of Afro-Peruvians. Mónica's organization, LUNDU, has received insults and even bomb threats for their role in eliminating this show. And to this day, I'm baffled why so many Peruvians insist that there is no racism in their country. The same day El Negro Mamá was taken off the air, LUNDU was celebrating the Day Against Racism by denouncing over 1000 racist news reports in the Peruvian media attacking Afro Peruvians with slurs such as "monkeys, gorillas, and baby maker stallions. 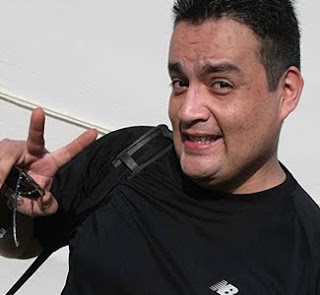 The popular TV show El Negro Mamá was played by Peruvian comedian Jorge Benavides (above), who like T.D. Rice, donned black on his face playing the role of a mentally retarded, dingy thief, reinforcing stereotypes against Blacks. Benavides, a mestizo actor wearing a rubber mask playing the wild-haired character, sports silly clothes and speaks slowly with an exaggereated accent and bulging eyes. El Negro Mamá is not only portrayed as lazy and stupid but simmering with criminal intent. He is often involved in thievery, drug dealing and common thuggery and even occasionally a rape.

So, what attracted me to Perú? As one who loves to explore the Black experience in Latin-American countries, while working to improve my Spanish; Perú was at the top of my list because of singers like Susana Baca and drummer/choreographer Rinaldo Campos who is the late founder of the internationally acclaimed dance troupe Perú Negro, Perú's answer to the Alvin Ailey Dance Theater of Harlem, not to mention the famous family of Amador Ballumbrosio, with whom I stayed on two of my trips. It was Afro-Peruvian singers, poets, and writers like Nicomedes Santa Cruz) who inspired my first trip to Perú.

They Consider Me Family
Posted by W Bill Smith at 12:00 AM