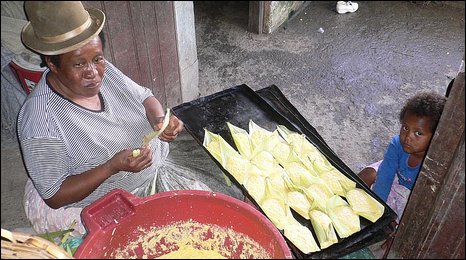 In a patch of rainforest in the Andes Mountains, three-hours from the nation's capital of La Paz, there is a hidden kingdom of Afro-Bolivians called Los Yungas. Julio Bonifaz Pinedo was two years ago crowned as the first Afro-Bolivian king, a move intended to further Afro-Bolivian cause of gaining recognition in Bolivia's new constitution. King Pinedo, owner of a humble grocery store,  is a direct descendant of Bonifaz, a tribal king from central Africa. The original Bonifaz was brought to Bolivia as a slave in the 16th Century to work in the silver mines.. Like most slaves who survived the mines, Bonifaz was later traded to estate owners in the plantations of Los Yungas, where the climate is more like that of sub-Saharan Africa. King Julio Bonifaz Pinedo is one of the 35, 000 poverty-stricken Afro-Bolivians who continue to feel overlooked even though Bolivia recently approved its first multi-ethnic and multi-cultural constitution.

The Andean Foothills of Los Yungas

Afro-Bolivians traditionally grow citrus, coffee, and banana trees, but have recently adopted the growing of coca, cocaine's raw material legally in limited amounts. Bolivians have been growing coca since the time of the Inca empire. The Afro-Bolivian, who have always been discriminated against, have no other choice for survival.

But today, for the first time since slavery in Bolivia, racist attitudes seem to be slowly changing.being that Black Bolivia is mentioned in the new constitution as one of the 36 Bolivian nationalities, and that radio talk-show host Jorge Medina is the first Afro-Bolivian to win election for national political office. He is the Black deputy in Bolivia's parliament giving voice to a people who historically having no voice. There are people in Bolivia who have no idea that there are Blacks in their country, and there are others who do not want to know. Afro-Bolivians already started to develop links with other black communities South America to get international recognition.