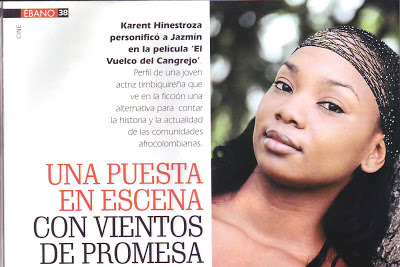 A page from Colombia's version of Ebony Magazine, which
I picked up from in a Black owned shop in Cartagena.
REVISTA ÉBANO (Ebony Magazine)


One evening, about 11 P.M. in Cancún, México, a cab driver dropped a group us African-Americans and one Latina at a hotel as we were spending the night before catching our flight to Havana, Cuba the next day.  As we were entering the hotel, we heard loud rap music coming from a restaurant inside. I thought this gesture by the restaurant management was so stereotypical. If I wanted to hear African-American music, I could have stayed in Oakland where I live. My purpose for travel, especially to a Spanish-speaking country, is to learn the culture of the country I'm visiting.

However, I notice during my discussion with other travelers, many prefer to go to beaches, tourist attractions, visit night clubs to hear American music, and meet other Americans. Although I respect their interests and personal preferences, I'm always quick to assert the fact that I generally avoid tourist areas and anything American. In fact, I generally avoid other English speakers, like I did in Cuba, even though I went with a group. Every chance I got, I ventured away from the group and entered deep into the Havana community. Being able to speak, read, and write enough Spanish to get around and mix with the locals made all of my Latin-American trips that much more interesting and enjoyable.
Posted by W Bill Smith at 10:10 PM