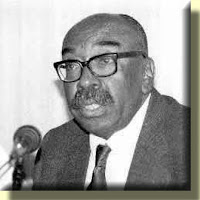 
Born in Lima, Peru's, rough La Victoria District, Nicomedes Santa Cruz, the ninth of ten siblings, was the greatest exponent of black culture in Peru. He was the first poet to treat black issues highlighting the important and unequivocal contribution of Blacks to Peruvian society. Santa Cruz was an Afro-Peruvian musician who, in the 1950s, began helping to raise public awareness of Afro-Peruvian culture.


After finishing school he decided to work as a blacksmith, which he did until 1956 when he began his calling of reviving Afro-Peruvian folklore through a theater company that he and his wife, Victoria, organized, and through radio broadcasts and collaborations with Peruvian daily newspapers Expreso and El Comercio as well as other publications.

Santa Cruz made his theater debut in 1957 in a show called Black Rhythms of Peru. During his travels, he continued to participate in events promoting Afro-Peruvian folklore, notably his address at the first Black Arts Festival, held in Cañete, a heavily populated black area in Southern Lima, in August 1971. In 1974 he traveled for the first time to the African continent, specifically Dakar, Senegal, where  he lectured in the Afro-Latino symposium on Black Peruvian folklore. He later traveled to Cuba and México, participating in a series of television programs, as well as later trips to Japan, Colombia, Cuba, and Panamá.

In 1980 he moved to Madrid, where he lived until his death, working as a radio journalist. He died of lung cancer on February 5, 1992. His birthday, June 4, has since 2006 been celebrated as a Day of Afro-Peruvian Culture. The Peruvian hip-hop group Comité Pokoflo released a tribute song to Nicomedes in their mixtape El Grito.