Why I'm Not With a Latina Posing with a new found Peruvian friend Karen of Lima

I often get questions from people, including my younger brother, as to why I'm not hooked up with a señorita since I'm so hooked on the Spanish language and Latino culture, specifically Afro-Latino culture with an emphasis on the music. For me that is a complex question to answer. Do I like Latinas? Yes, but I also like African-Americans, Africans, and Caribbean women. Especially the ones who are down to earth, good conversationalist, and have broad interests and value good, solid communication in a relationship be it friendship or intimate. 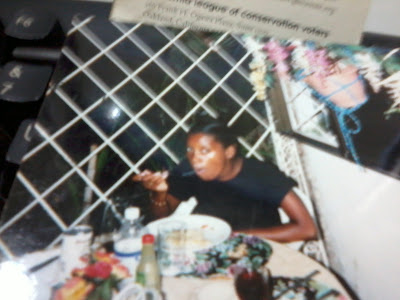 D Fuentes of Havana, Cuba who is the only woman during my Latin American
travels whom I entertained the thought of bringing home to mom and pop.

So far, I've traveled to nine Spanish-speaking countries going on 11, and as of this writing, I've met only one Latina (a woman in Havana, Cuba) I would have considered hooking up with. She's well built, dark, physically attractive, but most importantly, she is a good communicator, and doesn't play the games that the average American (men and women) play in relationships. The problem was when I got back to the US, the difficulty in keeping touch due to US/Cuban relations was overwhelming, and I just let it go. And so did she.

But the most profound answer I could give for not being with a Latina is that I'm not really looking. I'm content traveling, continuing to improve my Spanish, enjoying the music, the food, and the people I meet. Another reason is religion. I am not a believer of any organized religion, and that includes Catholicism. The woman I do hook up with be she Latina or not will be an independent thinker, and not prone to make life decisions solely based on the wishes of her family.
Posted by W Bill Smith at 12:00 AM