After making two trips to Ecuador, I really thought the place was no big deal. On one of my blog posts, My Feelings About Ecuador, I   talked about the people and how hectic and congested the country is. After some conversation with various Ecuadorians, I realized that my opinion was based on my experience in Quito, the nation’s capital. Ecuadorians I’ve met from other Ecuadorian cities are not too crazy about Quito either. However, even in Quito, I met some very good people, whom in my opinion, are lifetime friends. And they are  what I would call the exceptions. Lately, however, I’ve been finding that more and more Ecuadorians have been reaching out to me on my Spanish Facebook account. 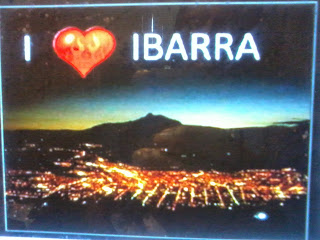 I'm considering the City of Ibarra, medium-sized city, where people are just as warm as the weather.

Overall, I found Perú—south of Ecuador’s  border—to be much more interesting and the people to be much more personable. This is why when I started thinking about my retirement plan, and how the US is getting outrageous with its cost of living, especially medical, I considered Perú for my retirement. Perú has an exceptionally low cost of living. But based on my research, however, I’m taking a second look at Ecuador, which has been recognized by International Living Magazine, and other sources, as one of the best places in the world to retire. In addition to the fact that I speak the language and the country has such great weather, Ecuador has considerably a cheaper cost of living than Perú. You can rent a nice one-bedroom flat in the city center of Quito, the nation’s capital, for $200 a month. Outside the city center, you can rent a three-bedroom home for $150 a month. I’m looking at the City of Ibarra, three hours north of Quito, which is even cheaper. Also, there are all the fresh, exotic fruits and vegetables you can eat for $12-$15 a week. In my 2010 trip to Quito, I paid the tab of a nutritious lunch for a friend, his girlfriend, and I at the university campus were he works; the bill for the three of us was only $6.00. And how about a full-time maid for only $340 a month? Ecuador’s health and dental is less than one- fifth of what you would pay in the US. I know from my two prior trips to Ecuador that you can take a taxi to just about any distance within the city for approximately $2.00. Upon documented proof of income of at least $800 per month, receiving a retirement visa will be easy. The main street of a black community near Ibarra known as Valle de Chota where I would like to volunteer my time teaching English.
Currently, I’m looking at training programs for Teaching English as a Foreign Language (TEFL), which is in big demand in both Perú and Ecuador,or simply be an English tutor if I decide not to invest the one-thousand or more dollars for the TEFL certification. In addition to supplementing my retirement income as and English teacher or tutor, I will be volunteering some time teaching English to children in the nearby black community of Valle de Chota (Chota Valley), which produces so many of Ecuador's professional soccer stars, inspiring the creation of the upcoming film Dreamtown. And of course, I will be offering my support to Black Ecuadorian civil rights and cultural organizations. My big concern now, after living in crime infested Oakland, CA where people are frightened out of their wits when see me, of all people, walking home from work, a lecture, or some other constructive activity, and having grown up in New York City during its worst crime-ridden years is that crime is a severe problem in Ecuador due to limited police protection –– HELLO OAKLAND! Naturally, I will have to take measures to make sure that no one sees that I have anything of value on my person; and being consistently vigilant. One of the biggest advantages I have, and I learned this from my last two trips, is that I inadvertently pass as Afro-Ecuadorian, and perhaps, appear not have enough money to be worth a robbery effort.. In my prior trips, there were numerous occasions when cabbies did not want to pick me up for fear that I too might be a robber. I managed to get one cabbie to change his mind when he saw me waving two five-dollar bills. When I finally got in, the cabbie became even more relaxed learning that I’m a traveler on vacation from the US, and not the stereotyped, racially profiled Ecuadorian. Oh, my. It looks like I'm going to feel right at home.