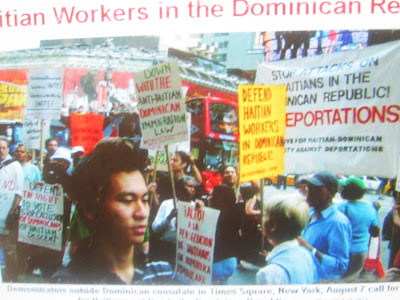 Due to the deep-seated racism against blacks in the Dominican Republic, even the average black Dominican will state, I’m not black, I’m Dominican. They refuse to identify as black because they do not want to be identified and persecuted as Haitian. Most black Dominicans, such as Sammy Sosa (allegedly) have gone as far as declaring Taino heritage. The Tainos are the indigenous people who were enslaved by the Spanish after Columbus' arrival and perished through overwork and disease before African slaves were brought in to replace them.

Haiti and the Dominican Republic share the island of Hispaniola, where Christopher Columbus established the first European settlement in 1492. Despite their shared history of colonialism and slavery, dictatorship and oppression, a physical and emotional border has long separated the two countries. By 1801 the famous ex-slave, Toussaint L'ouverture, had freed all the slaves on the island of Hispaniola and united it under his governorship. In 1808, five years after L'ouverture' death, a group of rebels started a war to return the eastern part the island to what is now the Dominican Republic– the west by this point was the republic of Haiti. By 1822,  Haiti had established control of the whole island once more. Indeed, the Dominican Republic gained its independence from Haiti, and not Spain, in 1844.

Modern times have demonstrated no less hostility. In 1937, Dominican dictator Rafael Trujillo ordered the massacre of 10,000 to 25,000 Haitians in border areas where many worked cultivating sugar.  Recently, there has been talk of African-American travelers boycotting the Dominican Republic, and there has even been demonstrations, such as the one in New York in front of the Dominican Republic embassy to pressure the Dominican government to stop the persecution.
What really needs to be addressed here, in my opinion, is the reason why so many Haitians flee their homeland in the first place for places like the Dominican Republic, the USA, France, and Cuba. I even met Haitians during my trip to Venezuela. While CARICOM and so many others are damning the Dominican government, what about the corrupt  Haitian government that has a long history of persecuting its own people? If Toussaint ‘L Overture were alive today, he’d be absolutely appalled with what is going on in the country he risked his life to liberate from France, and become the first black independent nation in the western world.
Posted by W Bill Smith at 12:00 AM