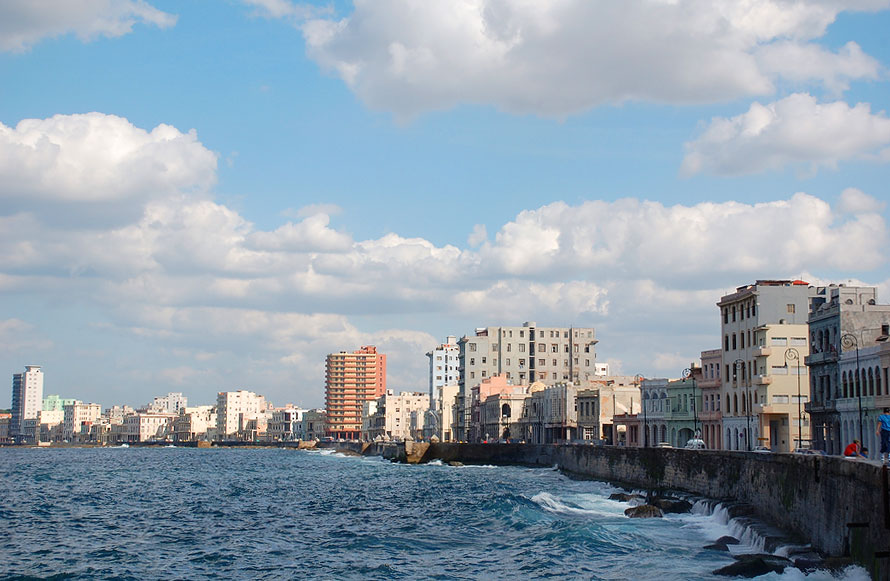 It was July 1998, through Global Exchange based in San Francisco, I was able to arrange a legal trip to Cuba for a Spanish-language immersion course at the University of Havana. Oh, the rush of joy that flowed through my whole body the second my plane touched ground in Havana. I felt a great sense of anticipation about the cultural immersion I was going to experience. If there is any such thing as deja vu, I felt it in Havana. A lot of my feelings of belonging had a lot to do with the large black population.

Being a salsa music lover, it was a joy just walking down the street hearing salsa, son, charanga, and timba music blaring from homes and businesses. One afternoon, there was a group of us walking through Central Havana where we heard this loud salsa song coming out of a restaurant. I grabbed one of the women in our group and we danced our hearts out right there in public.

Of the more than 100 cities that I've visited in 13 countries, Havana was the only city from which I returned feeling homesick.

It was amazing how so many total strangers in Cuba assumed that I was Cuban, but as soon as I opened my mouth, my being a foreigner was a dead give-away. They couldn't tell by my Spanish where I was from, what was evident to them--I was NOT Cuban! It was next to impossible for me to even fake a Cuban accent. There was one exception; a woman overheard me conversing with someone, and she leaned back and looked at me as though I were crazy. It never dawned on her that I'm a foreigner. She thought I was just being silly. At a hot night spot in Havana, I felt so flattered when an attractive woman asked my date if it was OK to cut in and dance with me. I busted one of my proudest salsa moves, and she blurted out in utter astonishment, "tu bailas como extranjero (you dance like a foreigner)!" LOL, oh well! She obviously thought I was Cuban too, and my dancing was just another dead give-away.

Of the more than 100 cities that I've visited in 13 countries, Havana was the only city from which I returned feeling homesick. It was more than a couple of years before I could stop talking about my trip.

Then there were the crooked ones, the street hustlers called jineteros (hee-neh-tay-roes) who would try to befriend me and con me into spending my money.

As I continued to talk about my trip to Cuba, I encountered many Cuban-Americans who feel nothing but resentment for Fidel Castro, and certainly felt resentment for people like me who appeared to be supporting the Castro regime, thus supporting the oppression of Cuban citizens. That's when I thought about the American embargo against Cuba, how it was hurting ordinary Cuban citizens much more than it was hurting the Cuban government. I saw this first hand.

Lydia, a black Cuban-American woman, was one of the viciously angry ones whom I met. She recommended a book entitled "Hijack" by Tony Bryant, a former Black Panther who gave his personal account of hijacking a plane to Havana in the name of the revolution and was sentenced to 12 years in a Cuban prison. It was there where he saw numerous human rights violations by the Cuban government and how Castro was exploiting and oppressing Cuban people. I began to understand why so many Cuban-Americans, like Lydia, are so angry.

In a city of over two million, the people are so pleasant and neighborly; highly approachable.

As time passed, I too was beginning to feel annoyed at the Cuban government, especially when they make it so difficult and so expensive to send packages or money to some of the dear friends I met. For every $100 you send to a needy family, the Cuban government gets a percentage. Last I heard, if you visit Cuba, you are not allowed to stay with a family or friend to get the cultural immersion that you won't find in a fancy hotel. Being that all businesses in Cuba, including hotels, are owned by the government, all visitors must stay in a hotel so the government can make the money and not a Cuban citizens.

During my stay in Cuba, i.e., before the Cuban government got ridiculously greedy with the tourist trade, I stayed with a family in the middle of a community where there were very few tourists. This was just what I wanted--total cultural and language immersion. I even met some women who helped to make my stay more enjoyable. In a city of over two million, the people are so pleasant and neighborly; highly approachable. You don't feel that sense of paranoia and fear when you stop people and ask for directions because you're lost like people here in American cities. It's probably because Havana is much safer than "any" mid to large city in the USA.

Any animosity between Cuban people and the United States lie solely with the two governments, not the people; at least not with Cuban people.

When people learned that I was from the United States, their immediate response was, "oh, nice to meet you," as they offered a handshake. The ordinary Cuban citizen admire American people and their culture(s). Then there were the crooked ones, the street hustlers called jineteros (hee-neh-tay-roes). They are not going to mug you; it's too risky. First offense, you do serious time; not slap on the wrist like in our country. It's safer to befriend you and coerce you into spending your money on them. For me, this was an amusing opportunity to practice my Spanish.

I felt a great sense of anticipation about the cultural immersion I was going to experience.


Any animosity between Cuban people and the United States lies solely with the two governments, not the people; at least not with Cuban people. They love it when American visitors bring t-shirts, CDs, and other American-style items they no longer need to give away. Everybody where t-shirts with the English word written on it. I remember meeting a woman on the malecón (the waterfront) wearing a New York Knicks jersey, and I shouted to her in Spanish, HEY, THAT'S MY TEAM :-) She looked at me bewildered--it turned out that she did not know what she was wearing. In fact, I didn't want to wear any of my Cuban t-shirt souvenirs because that would have been another dead giveaway as being a foreigner. I simply waited until I made it back to Oakland.

A Naive Trip to Cuba