Being Self-Taught in Spanish

Had I known that being self-taught in Spanish would be such a long, arduous task, I doubt if I would have continued to learn on my own and set unrealistic goals.

I was hired at my current place of employment because of my ability to speak Spanish. Hardly a day goes by when I'm not greeting, conversing or counseling a Spanish-speaking client. Unlike your average bilingual professional, I'm not a native speaker, nor did I take years of classes at a university. I am self-taught, primarily out of a book entitled Practical Spanish Grammar by Marcial Prado (a self-teaching guide).

Had I known that being self-taught in Spanish would be such a long, arduous task, I doubt if I would have continued to learn on my own and set unrealistic goals. I was advised on more than one occasion to take classes, but I didn't have the time. I really thought that I could be fluent within my first year of self-learning (LOL). As time passed, even to this day, it is evident that the more Spanish I learn, the more Spanish I realize I “don't” know. However, it is now too late to stop, considering the progress that I've made so far. Alberto, my private guide in Chincha Alta, Perú, accompanied me (three hours daily) about town as we conversed in Spanish.

In fact, I'm still learning the language and am still taking every opportunity to become more fluent through more self-study and travel to Spanish-speaking countries like Mexico, Cuba, El Salvador, Perú, and Ecuador. It was in Cuba and Perú where I took formal two-week crash courses to improve my Spanish while on vacation. In the Fall of 2010, I will include Chile and Colombia in my itinerary. It was in the beautiful Miraflores section of Lima, Perú where I earned an advanced Spanish certificate at a Spanish-immersion school. In addition, I practiced my Spanish by reading newspapers and storybooks, and by striking conversations randomly with those whom I perceived to be Spanish only. I created flash cards to memorize items from an English/Spanish phrasebook while waiting on line, waiting for a bus, or any situation where I might be bored. A fun way in which I practice my Spanish is by watching Spanish movies with English subtitles, and sometimes, English movies with Spanish subtitles. I even have a Spanish Facebook account, in addition to my English account, for making friends in Latin American countries and to develop contacts for my upcoming trips. 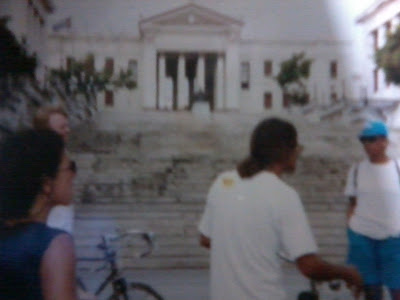 Sometimes, my Spanish really surprises me. There are times when my words flow like a native speaker, such as the time I was stopped by the Peruvian National Police for traveling-while-black, and there are times when I struggle to come up with words to express myself, such as conversing with a native Spanish-speaker who is fluent in English (bilinguals make me nervous). When I'm in a Spanish-speaking country where hardly anyone speaks English, my level of fluency rises by default. When I'm home in the USA where I'm speaking mostly English, my level of Spanish fluency takes a dive.
Posted by W Bill Smith at 12:38 PM