Do All Latinos Look Alike? 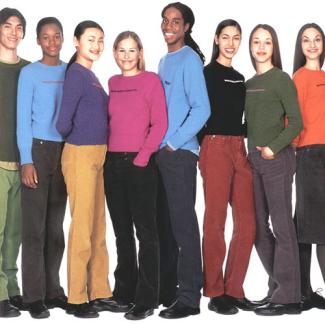 Any one or all of these folks could be Latino.
One day while riding the Bay Area Rapid Transit (BART) from San Francisco, where I work, to Oakland, where I live; I was engaged in conversation with two other black guys. One was Cuban and the other Colombian. Since the Colombian brother spoke limited English, we carried on our conversation in Spanish. These two guys didn't notice, but I got a real thrill out of observing whites, blacks, Asians, and Latinos (who really should know better) reacting in surprise because three “brothas” were conversing Spanish.

How can you possibly look at people and know for sure which language they can and cannot speak?

History tells us that more slaves ships went to Latin America than the U.S., thus there are more Spanish-speaking black folks than English-speaking black folks. Furthermore, I've had the pleasure of meeting Latinos of Asian, Middle Eastern, German, and Indigenous ancestry. So, why do so many people feel they can simply look at someone and determine which language one speaks? WELL, I'M LISTENING!!!