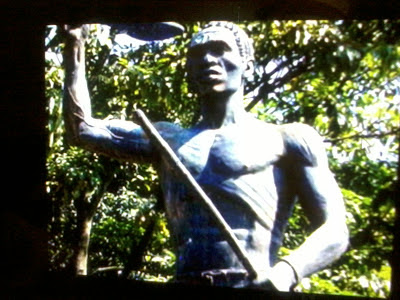 Since grade school, I was under the impression that the first African slaves who arrived in America in 1619 were the 20 or so slaves from Angola who stepped ashore in Jamestown, VA. What they did not teach us in grade school was that by 1609, 11 years before the Mayflower, the first black-ruled town in North America was granted its status as a self-governing municipality by Spain. This town is called Yanga in Mexico's state of Veracruz where a statue of its founder, Gaspar Yanga, a former runaway African slave, graces the town square today.

According to the historian Herman Bennett in his book, Africans in Colonial Mexico, the Black population was equal to, if not more than, the Spaniards throughout Mexico, then known as New Spain. And in the State of Veracruz, African descendants made up of 63% of the non-indigenous population. By 1810, the year Mexico declared her independence from Spain, there were 624,000 free Blacks making up10% of the total population, and making Mexico the second-largest slave nation, and the largest nation with free black population in the Western world.

Mexico's Black population traditionally was concentrated along its two coasts, one around the port of Veracruz (where most of the slaves landed) on the Gulf of Mexico, and the other in a district known as the Costa Chica, on the Pacific Ocean near Acapulco. The primary reason why the Black presence in Mexico today is not as plentiful as during the colonial era is because of interracial marriages over a period of over 500 years, which unlike the USA, were never outlawed. Many Mexicans and Mexican=Americans would deny that they have any strain of African blood. According to the Schomburg Center for Research and Black Culture in New York City, 75% of Mexican people has a Black great grandmother/father in their closets. There is more to Mexican culture than the Spanish and the Indigenous; there is the African--the third root.