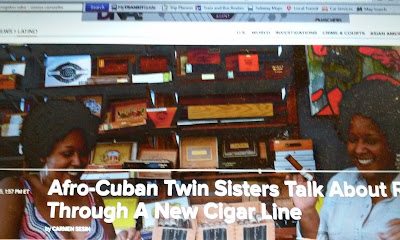 So many people are taken aback to learn that a increasingly popular Cuban cigar brand is owned by two young Afro-Cuban woman in an industry dominated by older white Cuban males.

Although fluent in Spanish as well as English growing up in a Miami community heavily populated by white Cubans, they were taught to be black and proud by their grandmother, and became bi-cultural as they embraced African-American culture as well as their own Cuban culture interacting and weaving comfortably well in both Latino and African-American communities.

An ongoing surprise to me is the number of Latinos who seem to be so unaware that there are black folks in their community who, like they themselves, have Spanish-speaking roots. Cubans, of all Latinos, should know better considering that their home country  has an overwhelmingly black population.

MIAMI, FL -- When Afro-Cuban-American twin sisters Yvette and Yvonne Rodriguez launched their Tres Lindas Cubanas cigar line last year, they wanted it to represent some of the diverse Cuban races as well as honor their grandmother, who inculcated them with pride in their African roots.
On a recent afternoon in a Coral Gables cigar shop, the twins point out their three signature cigars: "La clarita" - which means fair-skinned - and is light-medium bodied; "la mulata," which means mixed black/white as is medium-full, much like their grandmother; and "la negrita" means black which is their strongest, full-bodied cigar.


Coming from a mixed race family, the twins were somewhat confused when they were growing up in Miami, where the Cuban population is predominantly white. Their mother, a Cuban mulata, and father, a black Cuban, settled in the Miami suburb of Cutler Ridge, which had a mix of races.
"We were Cuban, we were black, and the kids did not understand that," Yvonne said. When their light-skinned grandmother would pick up the twins and their brother from school, students were puzzled to see her fair complexion. "Kids would ask 'who's that?' This light-skinned woman picking up three little black kids," Yvonne said. They recall bus rides home from middle school telling students about their ancestry.

The witty and lighthearted twins speak with adoration of their maternal grandmother and admit they were also confused growing up. "She was a mulata of mixed race but she came out very light skinned," Yevette explained.

Their grandmother emphasized the importance of being proud of being black. When people complimented her for being elegant, she would respond 'an elegant mulata.' Yvette explained "it was weird for us because for me she was just a white woman … she was a white woman saying 'nosotros las negras'[us black women]," they said laughing.

Although their complexion was confusing for them when they were 10 years or 12 years old, when they were a bit older they realized they were comfortable around Latinos as much as they were among African-Americans and weaved comfortably in and out of both communities.
"We could jam out to hip hop or R&B and speak Spanish a few seconds later. We are very in tune with both cultures," Yvonne said.

Growing up in Miami, "we were Cuban, we were black, and the kids did not understand that," say the sisters. "We are very in tune with both cultures." Their grandmother, who was much of the inspiration behind the cigar line used to smoke cigars regularly. By the time the twins were 16 years old they were not scolded if they took a few puffs from a cigar during a family gathering. When it came time to name the cigar line they decided on "Tres Lindas Cubanas," - which translates to three pretty Cubans - an old song from Orquesta Aragon, a band founded in Cuba in 1939, that is a constant in Cuban households. While growing up, the twins often listened to the song at family parties. "It's old but we would jam out to it," Yvonne said.
It was through classic music, food, and stories that Yvette and Yvonne learned about their Cuban culture. "Back then the embargo was real and there was no Internet," Yvonne explained. Their parents were traditional, conservative, and Republican. But growing up in the U.S. they embraced African-American culture in addition to their Cuban culture and found their own identity.
"We don't fit the mold people are accustomed to seeing," Yvonne said.
These variations are the essence of the cigar line, which they say has created a dialogue for those who are confused like they once were.
Posted by W Bill Smith at 6:55 AM