If you love to travel, don't test your luck; you never know when it's going to run out----Get Travel Insurance!

I was only a week into my 30-day Latin-American vacation through Mexico, Panamá, Colombia, Ecuador, and Perú. Most of my time was spent in Perú where I already had close ties with people developed from prior trips. However, after one-week, I went into the Sandwich.Com Restaurant in the ritzy Miraflores section of Lima, Perú. I thought because of the location and the international clientele it served, the restaurant staff knew better than to mix local tap-water in its beverages.

I started feeling sick after I got half-way through my drink. The next two days, I suffered from diarrhea. At first, I tried to tough it out thinking after the diarrhea runs its course, I'd be OK. All I needed to do was get some rest. Wrong! Continuing to rough it out believing I will recover naturally, I took a two and one-half our bus ride to Chincha, Perú where I was staying and flopped down on my bed, later waking up in even worse condition. By this time my kidneys were aching and I was feeling even more nauseous. The hotel manager heard my moans and groans and called an ambulance.


Go figure, I was so tempted to use the insurance money for something else and am glad I didn't.

Fortunately, I had a lot of close ties in this town who arranged for me to be transported by ambulance back to Lima to be treated at a very good hospital, La Clínica Ricardo Palma, which in my opinion, is a hospital that will rival any hospital in the U.S. The medical staff was absolutely superb, although sometimes I think they gave me a little too much attention. It was also a good thing I had Access America Travel Insurance because I learned that my intestines were infected and I was to be hospitalized for five or six days. It could have been much longer had I not insisted on an early discharge. I was determined to finish out the rest of my vacation, and I did; contrary to doctor's orders. I spent the rest of my vacation at 75% of my full strength, spending a lot of time between resting between having fun. 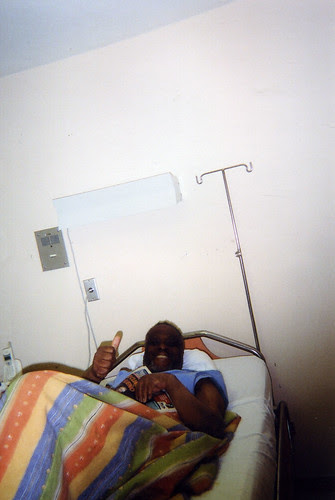 Were it not for travel insurance, I would have had to pay over $4,000 out of pocket or I could have died from lack of proper treatment. Access America Travel Insurance was able to work out a billing arrangement where all expenses were paid. Access America gave me even further comfort by assigning me a case manager who followed up more than once with phone calls to my hospital room to check on my progress.

Go figure, I was so tempted to use the insurance money for something else and am glad I didn't. If you love to travel, don't test your luck; you never know when it's going to run out----Get Travel Insurance!
Posted by W Bill Smith at 6:14 PM