Was He Mexico's Barak Obama? 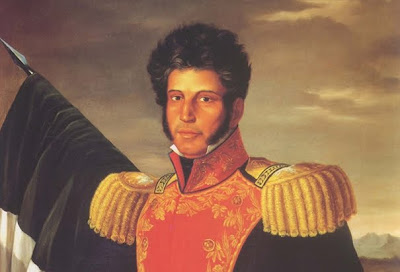 President Vicente Guerrero of Mexico (1829) and President Barack Obama (2008-2016) have some things in common as well as differences. Both are of African heritage; Obama on his father's side, and Guerrero on his mother's side. Like Barack Obama, Vicente Guerrero tried too damn hard to please the very people who disliked him as he received stubborn, heated political opposition because of his African ancestry. When Obama was elected, my hope was that he would watch his back, and not surprisingly, Obama receives considerably more death threats than any other president in the history of this country. Guerrero's presidential term, on the other hand, didn't even last a year before conservatives threw him out of office, convicted him of treason, and put him to death.


Vicente Guerrero immediately set out to improve the conditions of Afro-Mexicans and indigenous people.

Guerrero, like Obama, had a thorough understanding of the Constitution of the United States. Guerrero was inspired by the Constitution to order the immediate release of every slave in Mexico, be they black or indigenous. Unlike Obama, who is getting heat from blacks, like the Congressional Black Caucus for overlooking the needs of the black community, Vicente Guerrero immediately set out to improve the conditions of Afro-Mexicans and indigenous people.


Mexico does not have a one-drop rule.

Mexico, historically, does not keep statistics on race. According to my understanding, Vicente Guerrero was responsible for this policy because he wanted all of Mexico united regardless of race, economic standard of living, or class. Whereas, the U.S. not only kept racial statistics, the one-drop rule was included where one drop of black blood makes you black. Mexico does not have a one-drop rule.