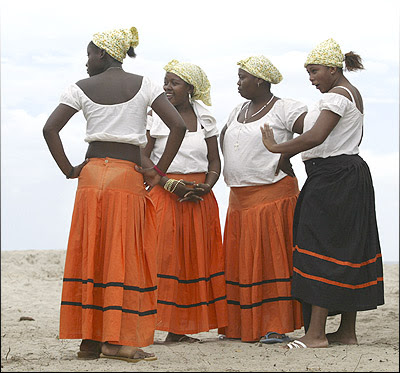 Black Guatemalans? Absolutely! Even many Guatemalans themselves are unaware of the Black community in their own land. I've always known that the African diaspora was widespread but when I heard about Blacks in Guatemala I was not at all surprised. As one who loves to travel and be exposed to black communities in Latin America, Guatemala is on my list of places to visit. Livingston, Guatemala, is home to over 6,000 Black folks, also known as Garífuna. The rest of the Blacks are Afro-Caribbeans who live in Puerto Barrios and Morales on the East Coast. Also many blacks live in Amatitlán, San Jerónimo, and Jutiapa.

During the 1700's, the Europeans brought Africans to the Americas as slaves, and it is believed that this particular group of Africans were from Ghana. Many of the slaves came to Guatemala to work on cotton, sugar cane, tobacco, and coffee plantations. The national folk instrument, the marimba, has its origins in Africa and was brought to Guatemala and the rest of Central America by African slaves during colonial times. The melodies played on it show Indigenous, West African and European influences in both form and style.

In 1795, the African slaves, led by Marcos Sanchez Díaz, revolted on the island of St. Vincent and fled to the island of Rotan in Honduras. Most of them eventually intermarried with the Indigenous population. Slave importation did not last a long time as the conquistadors became very nervous due to the uprising of the Blacks they captured. Slavery became less important to the conquistadors and was abolished in 1823. The language these African descendants speak is called Garifuna, a mixture of French, indigenous languages, Creole, Bambu, and Patua.

In 1804, Marco Diaz founded Livingston, popularly known as La Buga, a Garífuna word for “mouth,” located between the mouth of the La Dulce River and Amatique Bay. Traditional fishing fishing has been a longstanding way of life in Garifuna culture. Livingston is only accessible by boat, and, as a result, air pollution is almost non-existent. The only cars in town belong to the police, and those are few in number. To get around, most people ride a bicycle or walk. With the beach only a few steps away from almost any part of town, life here is wonderfully laid-back. No one is in a hurry to do anything.

Today, the Garífuna people and the Afro-Caribbean people organized ONEGUA, which stands for The Organization of Black Guatemalans, a community group that provides educational and cultural support for Black Guatemalans and receives no financial support from the Guatemalan government.