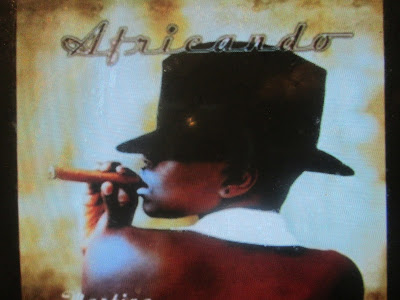 This photo is from the album cover of the salsa group Africando out of Senegal, West Africa whose mission is to bring salsa music back to its African roots.


"New York City, I don't know why I love you;
could be you remind me of myself!"

Yesterday, I off boarded the subway train at East Tremont in the South Bronx, a community primarily of black Americans and Latinos. As I walked down Grand Concourse to my scheduled appointment, I felt very uplifted hearing salsa and bachata music blaring from people's apartments. This was blunt reminder that I finally arrived back at my home sweet home of New York City after spending most of my adult life in Oakland, California.

New York City residents asked me why would I want to leave California, as though California were some type of utopia, to return to New York. The rational answer that I gave is that my brother inherited a luxury living space in Midtown Manhattan, just blocks from Central Park, and invited me to come back home and be with family.

What I left out of my response was that I am a New Yorker at heart. While going to school in upstate New York, and all during my stay in Oakland, known on the streets as Oak-Town, I could not stop talking about New York, NY. I am surprised that no one suggested that I go back. I've done quite a bit of traveling in my life, and there is no city that matches the rich, cultural, and literary depth and diversity as New York City. Besides, I love the straight-forward communication style of native New Yorkers.

My special attraction to New York is its heavy Afro-Latino population. As a young kid growing up just walking distance from Spanish Harlem, I started feeling a strong attraction to the Spanish language and Latin-American culture, especially the music.

It was in New York where I was introduced to the likes Eddie Palmieri, Ray Barretto, Willie Colon, Ralphi Pagan, Hector Rivera, and Pete Rodriguez, all whose music spilled over into the black American community way back in the day. Even black American radio stations like WWRL and WBLS featured these artists because of the heavy African influence in their music.

As I alluded to in my blog post, Coming Out as Trans (Trans-Cultural), there is a strong element of Latino culture in my soul that I feel from deep within even though I was born a black American, which has thus far inspired my travels to nine Spanish-speaking countries where I was totally immersed in the language and the culture.

Even after flying into New York from Oakland, I found myself engaged in a Spanish-speaking conversation with my Dominican cab driver who appeared more comfortable speaking Spanish than English.

Here in New York, I will get to use, and thus, develop my Spanish more. The trick is learning who is bilingual and who isn't. As I was walking through the South Bronx, I overheard a couple of Afro-Latinos speaking Spanish, and when I stopped to ask for directions in Spanish, they, in a very friendly manner, gave me the directions I needed—in English. However, once I resume my Latin-American travels, I will not have to worry about that type of response any more.

At least here in New York, I will be able to attend more Afro-Latino events, go to plays, and get access to libraries and museums about Afro-Latinos that California lacks.
Posted by W Bill Smith at 11:11 AM