An Object Lesson on U.S. Latinos 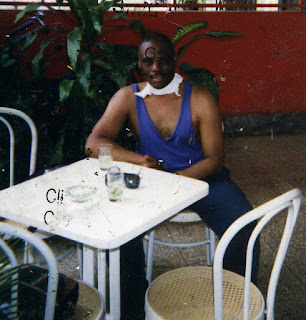 In a hot Havana heat in July, I'm chilling
out on a mojito, Cuba's national drink.

On my first day in Cuba, I learned an object lesson as to how so many bilingual U.S. Latinos feel, when we non-native speakers try to practice our Spanish on them.

I was bicycling along the malecón (waterfront) in Havana, and this brother rode up beside me striking up a conversation in "English." I got insulted because I felt that he thinks "this gringo" can't speak Spanish. To teach his narrow ass a lesson, I decided to respond to everything he says to me in Spanish; just as U.S. Latinos respond to me in English when I speak to them in Spanish.

Finally, the brother snapped and shouted, "MAN, STOP SPEAKING SPANISH, I'M TRYING TO PRACTICE MY ENGLISH!" My empathy and compassion suddenly kicked in, and I gladly complied :-)

The same thing happened in Lima, Perú. When a man whom I kept responding to in Spanish inside of a restaurant asked me politely if its OK to practice his English, I granted his request knowing that I will be overwhelmed with plenty of other opportunities to practice my Spanish.

I just wished that more of my U.S. Latino neighbors and schoolmates had the same compassion for me in my attempts to improve my Spanish.