It never ceases to amaze me when I meet Peruvians who tell me that there is no racism (see Racism, Latin-American Style) in Perú. If that were the case, why do they have so many civil rights organizations? It can't be paranoia. I read somewhere that internationally acclaimed Afro-Peruvian singer Susana Baca donates money to Peruvian civil rights organizations. Because of my frequent trips to Perú, it has been a heartfelt pleasure for me to connect with members of the International Network of Young Afro-Peruvians, better known as ASHANTI, and Makungu Para El Desarrollo which unites Afro-Peruvians in the city of Lima. I'm also interested in another organization called LUNDU, which has a branch in my goddaughter's province of Chincha, Perú. 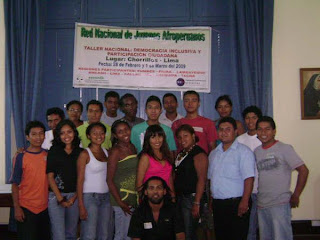 The International Network of Young Afro-Peruvians, otherwise known as ASHANTI-Perú, strive towards civil rights for Peruvians of African descent.

When visiting any Latin American country, I try to learn as much as I can about the country's black history and try to get as close to the black experience of that country as possible. On two occasions, I myself had some racist run-ins with Peruvian cops (see Traveling While Black). I was stopped thrice in one hour in the border town of Tumbes because they thought I was an illegal alien from Colombia or Ecuador. Another cop in Lima wanted to brush me off when I tried to ask for directions, only to have a change of heart when he heard my foreign accent and realized I was a harmless tourist, and not the feared Afro-Peruvian native. 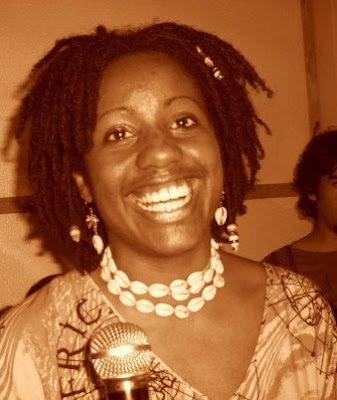 On each of my trips to Perú, I see the same thing; an under-representation of blacks, browns, indigenous, and Asians in mainstream business and industry. Even in the heavily black populated Province of Chincha, blacks and indigenous people are literally invisible in commercial areas. When I do my banking, I never see any people of color, with the possible exception of the security guards. 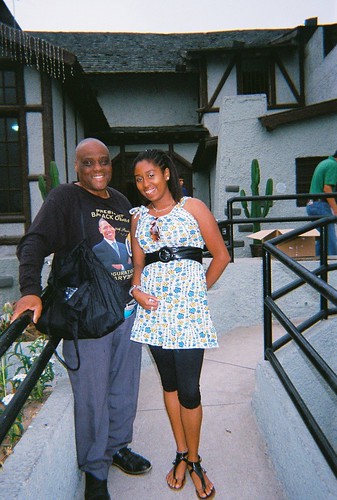 I met Karen, a member of ASHANTI,
at a dance performance in Lima.
Civil rights leader Monica Carrillo, founder of LUNDU, emphatically points out that she does not want another generation to go by with the kind of racism that has been historically practiced against Afro-Peruvians. From my personal observations, it is also practiced against Asians and indigenous people. Mónica Gisella Carrillo, a graduate of the University of San Marcos and Oxford University in London is also a poet, and singer. Lundu works with youth of Afro-Peruvian descent to help them overcome discrimination through arts, advocacy, education, civic engagement, and economic and educational opportunities. Grants have supported Lundu’s outreach to Afro-Peruvian youth and offers workshops that strengthen leadership and life skills. 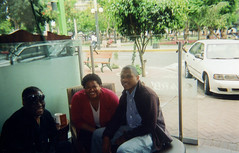 I'm hanging out with members of Makungu Para El Desarrollo,
Mariela (center) and Alberto (right) at Starbucks in Lima, Perú

Black Peruvians have preserved African music and other aspects of their heritage, and took a cue from the U.S. Civil rights movement and started movements of their own.