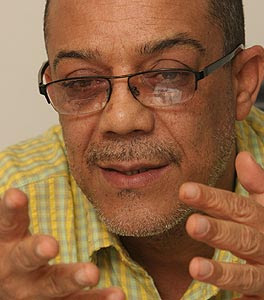 As a salsa music lover raised on New York-style salsa, it took me a while to get used to Colombian-style salsa, but when I did, Grupo Niche, co-founded by Jairo Varela, turned out to be my favorite. Alexis Lozano, who co-founded the group with Varela, started another group, which also became famous called Orquesta Guayacan. Because Grupo Niche is so consistent with their vigorous, up-tempo dance music, I reached the point where I would buy Grupo Niche recordings cold without ever first hearing any track samples. Unlike most other recordings I would buy, I was never disappointed.


From the time Varela was eight-years-old until he was twelve, he played with a band of children from his community in the Afro-Colombian Chocó state ( called a department in Colombia) on the Pacific coast. His group was called La Timba who raised funds for their pastimes playing African-based folk music on bongos, maracas, and guiros during festive events. At the age of 17, Jairo moved to the nation's capital of Bogota and continued his musical career. He started composing and, along with Alexis Lozano and formed Grupo Niche. Niche is a Colombian term that describes dark-skinned people. Because Bogota was not receptive to the African-oriented sounds he brought from Chocó, he move to Colombia's salsa music capital Cali, a city with a considerable Afro-Colombian population that gave Grupo Niche total support.

With the money Jairo made from his musical career, he ended up owning a modeling agency, a discotheque and a state-of-the-art recording console. He also gave generously to support aspiring Afro-Colombian politicians, something Varela thinks the powers that be did not like. Despite Jairo Varela's fame and fortune, he still found himself a victim of the same misfortune that put a disproportionate number of black men behind bars. He strongly feels that his wealth and influence caused resentment in a country he believes is not ready to accept a powerful black man.

Grupo Niche is based in Cali, the salsa music capital of Colombia.

Jairo Varela, was arrested and jailed for an alleged connection to a drug cartel for whom he and his band performed. It didn't matter that white musicians also performed on the same payroll. “Colombian racism was quite clear, “ he told the Miami Herald newspaper. However Jairo, the genius of a musician and businessman that he is continued to manage his band, compose and record during his three-year prison sentence and was released under the condition that he not travel outside of Colombia. Thus, Grupo Niche continued to tour the world and even recorded two albums under Varela's direction from back home. Jairo Varela still earned seven gold and four platinum records.


My Top 10 Favorites by Jairo Varela and Grupo Niche: