Benkos Bioho, a successful slave revolter in Colombia who left a legacy of a free black town that stands to this day.

As I plan my next trip to South America, I'd like to share a Facebook message I received from a new-found Afro-Colombian friend in preparation for my return trip to South America, where Colombia will be added to my intinerary. He tells me that it is super easy to find and that descendants of one of the first freed slaves in the Americas can be found 40 minutes from Caragena, Colombia by car. 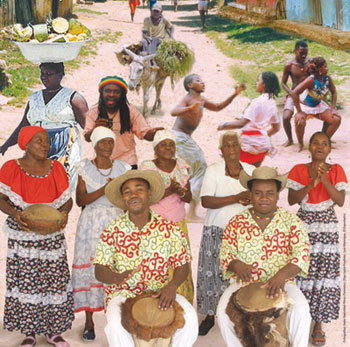 The all black town of San Basilio de Palenque in Colombia boasts of being the first town in the Americas to free themselves from slavery.

We hear about Nat Turner and Denmark Vessey who planned the biggest slave revolts in the United States of America until some house-slaves snitched to the slave masters. Other slave revolters were much more fortunate and successful in places like Yanga, Mexico, Esmeraldas, Ecuador, and a place called San Basilio de Palenque in Colombia. In Colombia, a slave, once an African King in an area now known as Guinea Bissau by the way of Benkos Biohó, from an area of West Africa we now call Guinea Bissau by the name of Benkos Biohó escaped slavery in Colombia's Port of Cartagena by boat down the Magdelena River and settled in an area now known as San Basilio de Palenque.
Posted by W Bill Smith at 12:24 AM