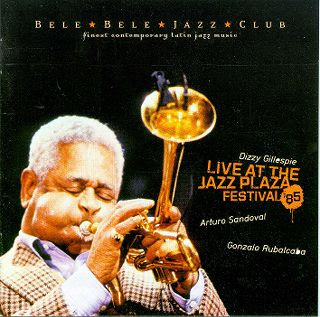 The music the world knows as salsa did not just evolvd from traditional Puerto Rican or Cuban music. Many jazz artists began interacting with Cuban music as far back as the early 1900's. Some of those interactions resulted in Dizzy Gillespie's famous piece, "Night in Tunisia." Dizzy Gillespie was an American jazz trumpet player, bandleader, singer, and composer dubbed "the sound of surprise"

Together with Charlie Parker, he was a major figure in the development of bebop and modern jazz. He taught and influenced many other musicians, including trumpeters Miles Davis, Fats Navarro, Clifford Brown, Arturo Sandoval, Lee Morgan, Jon Faddis, and Chuck Mangione. Arguably Gillespie is remembered, by both critics and fans alike, as one of the greatest jazz trumpeters of all time.

Dizzie Gillespie was also instrumental in founding Afro-Cuban jazz, the modern jazz version of what early-jazz pioneer Jelly Roll Morton referred to as the "Spanish Tinge." Gillespie was a trumpet virtuoso and gifted improviser, building on the virtuoso style of Roy Eldridge but adding layers of harmonic complexity previously unknown in jazz. Dizzy's beret and horn-rimmed spectacles, his scat singing, his bent horn, pouched cheeks and his light-hearted personality were essential in popularizing bebop.

Dizzy Gilespie also worked with the renown Latin music maestro Mario Bauza in New York jazz clubs on 52nd street and several famous dance clubs such as Palladium and the Apollo Theater in Harlem. They played together in the Chick Webb band and Cab Calloway's band, where Gillespie and Bauza became life-long friends.

Afro-Cuban jazz was considered bebop-oriented, and some musicians classified it as a modern style. Afro-Cuban jazz was successful because it never decreased in popularity and it always attracted people to dance to its unique rhythms. Gillespie's most famous contributions to Afro-Cuban music are the compositions "Manteca" and "Tin Tin Deo" (both co-written with Chano Pozo); he was responsible for commissioning George Russell's "Cubano Be, Cubano Bop", which featured the great but ill-fated Cuban conga player, Chano Pozo. Chano Pozo is one of a handful of famous Cuban percussionists who came to the United States in the 1940s and 50s. In September 1947 he featured with Dizzy Gillespie's Big Band at Carnegie Hall and subsequently on a European tour.
Posted by W Bill Smith at 2:50 PM