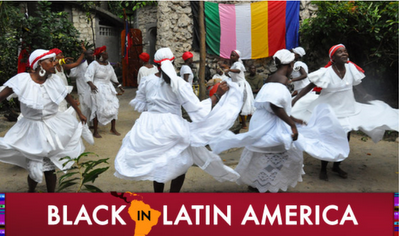 I was just watching the TV series Black in Latin-America. Of all the things that were discussed in this series, I've been blogging about for more than one year. People are beginning to wake up to the fact that more blacks went to Latin-American countries, including Mexico, Argentina, and Perú than to the United States of America. What is even more pleasant is that more and more African-Americans are also waking up for too many of us seem to feel that we African-Americans are the only legitimate blacks in the African diaspora.

What surprises me more than anything is that so many Latinos I meet are unaware of the African presence in their own countries. The TV host, Professor Louis Henry Gates Jr., said it well, Latinos have black abuela (grandmother) in the closet.

On a couple of occasions, I had to explain to some young Mexican-Americans, who thought it was so humorous that a black person (referring to me) is speaking Spanish that there are over 150 million Spanish-speakers who are black, not to mention the millions of others who have African blood, like Fulgencio Batista, former president of Cuba, and Vicente Guerrero, Mexico's liberator and second president.