Almost 200 years before General Vicente Guerrero, son of a Black slave mother, led Mexico to her independence, the town of Yanga, led by its Afro-Mexican liberator Gaspar Yanga, gained independence from Spain, creating one of the first free Black towns in the Western world.  Word among the locals says that Gaspar Yanga escaped slavery in the region of the Nuestra Señora de la Concepción plantation in 1570. Regional lore also says that Yanga was a prince stolen from a royal family in what is now known as the Republic of Gabón in Western Africa. The word "Yanga" has origins in many regions of West and Central Africa, including the Yoruba regions in Nigeria where the word means "pride".

Between 1570 and 1609, Yanga led his followers into the mountains located in the vicinity of Pico de Orizaba, the highest mountain in Mexico. By 1600, it was reported that the Yanga joined forces with another escaped slave Francisco de la Matosa and his group of African warriors.

Yanga's rebellion turned into decades of resistance against colonial Spain. By 1631, the Viceroy of New Spain Rodrigo Pacheco began negotiations with Gaspar Yanga, and struck an agreement of an autonomous region for the African-Mexican community. The first official name was San Lorenzo de los Negros (aka San Lorenzo de Cerralvo). Since 1932, the Mexican town has borne the name of its liberator Gasper Yanga. The town reports approximately 20,000 citizens that is now primarily mestizo (mixed heritage).

Like Yanga's birth, no definitive records are available regarding Yanga's date of death. The first information about Yanga arose in the second half of the nineteenth century by the historian and ex-general Vicente Rivas Palacio, grandson of Mexico's first black president, and Mexico's liberator Vicente Guerrero. 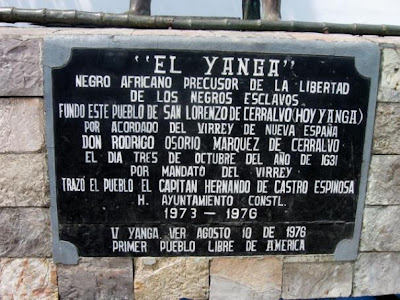