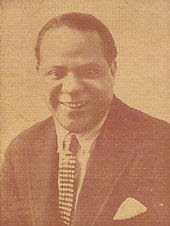 Enrique Maciel born  to an Afro Argentine family in Buenos Aires, July 13, 1897 was a versatile and sensitive composer, lyricist, pianist, and guitarist, which identified him permanently in the memory of tango listeners. Maciel received his early musical instruction in a local parochial school, and his first public performance was in 1915. His first tango, "Presentación," remains unpublished. He joined small groups acting in houses and dance halls, touring the provinces.

In 1920, he along with a poet, released their collaboration with the tango "La Tipa." Enrique became a contractual guitarist with RCA-Victor. Maciel's skill as a pianist earned him the tripling of an otherwise modest salary. His first new tango under this arrangement was “Grief.”

In 1925, Macial with other musicians formed a popular group, which received a lot of airplay on Argentine radio, particularly on Radio Buenos Aires. The group gradually fell out of favor with listeners, and the group disbanded during the 1950s.
Posted by W Bill Smith at 12:00 AM