Latino Use of the "N" Word 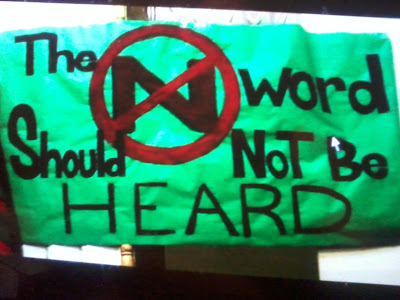 Obviously, this woman is not from my neck of the woods where during my youth in New York City, Puerto Ricans of all colors, have been integral parts of African-American communities throughout the city. And this included the common use of that “N” word; not in racial context, per se, but what I would call a corrupt and misguided term of endearment. I even heard an African-American teen clowning a non-black Puerto Rican friend with the “N” word.

About a year before I went to college, three schoolmates and I were hanging out. Two were African-American; one was a brown-skinned Puerto Rican, and the other was white. The Puerto Rican, Robert Hernandez, got a little upset with me about something and shouted the “N” word (directed at me). The white classmate looked at me chuckling, wondering what I was going to do about it. I merely shrugged it off simply because I viewed Robert as an ethnic cousin in the hood whose closest friends included African-Americans.

Had Robert been of another Latin-American nationality, I most likely would have viewed it differently. Case in point: I was riding with a group of coworkers to a company event, and as we passed through a black neighborhood, a Chilean immigrant in the car started making derogatory remarks about the ghetto. I reported him to company management who in turn called him on the carpet for an explanation. He gave an insincere apology along with some weak excuses for his insensitive statements. He must have assumed that because I speak some Spanish and take trips to Latin America that I am  not “black” enough to be offended. Since his true colors came to light, he and I never spoke again unless it was work related, and even that was seldom.

I am by no means defending the use of that “N” word among African-Americans, let alone Latinos, and I really wish we would all drop it from our vocabulary all together. One afternoon while coming home from work on a commuter train, this thuggish looking black guy kept shouting “N” throughout his cell phone conversation. I then noticed two white women looking at each other in shock and disgust. I could just about read their minds as they were saying to themselves, it's bad enough when white people use such a derogatory term. I wouldn’t use it! Why is he using it and degrading himself this fashion, especially in public?

In the film, The Butler, a classy black servant working in an upscale hotel slapped a young black protégé for using that word stating it is racist, filled with hate, and that we blacks, of all people, should not be using it. It is of my utmost conviction that every black man, woman, and child who uses that word needs a good, old-fashioned slap in the face; including Afro-Latinos.