Are Black Men Exotic to Women in Latin America? 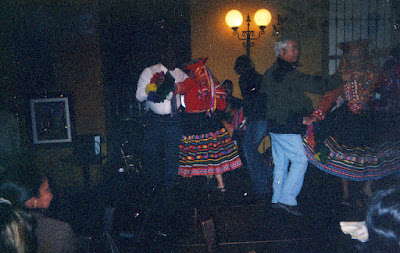 A female Peruvian dancer pulled me on stage to
dance with her at an upscale Lima supper club.

They say that black men are considered exotic to women in foreign countries. I found that it all depends on the country and with whom I'm around. Although, I've been to Canada and four Asian countries, my travels as of late, has been focused on Latin America.

In Cuba, a country that is predominately black, I was not considered so exotic until people heard my foreign accent and asked where I'm from. However one evening, I was dumbfounded when a group of us Americans who were studying Spanish at the University of Havana went to see an Afro-Cuban dance performance in a suburb of the city. I was the only black in the group of American spectators. Towards the end of the show, the dancers came off the stage; the men grabbing the women, and the women grabbing the men to dance. I was left sitting all alone.

Word on the streets of Havana about me was because of my color, I was perceived as being “too Cuban,” therefore not exotic or touristy enough to want to entertain. In fact, before my trip, an Afro-Cuban neighbor told me that when I arrive on the island, people will automatically assume that I'm Cuban until I open my mouth. Cubans can very easily tell by my Spanish that I'm a long, long way from being Cuban.

Throughout my Latin-American travels, while I'm admiring the black women, it's usually the white and mestizo women who are admiring me.

However, things took a different turn when I went to a live show in an upscale supper club in the Barranco District of Lima, Perú where I was one of two black spectators. Towards the end of the show, one of the  mestizo female dancers came off the stage, bypassed several tables, and walked directly over to mine to bring me on stage to dance with her. Interesting!


In many cases throughout my Latin-American travels, while I'm admiring the black women, it's usually the white and mestizo women who are admiring me. On a metro train in Caracas, Venezuela, my friend María and I went chatting in English and Spanish, then we noticed a white Venezuelan woman eying me with an admiring smile. She seemed very pleased when I struck up a lightweight conversation with her in Spanish. At a restaurant where I often frequented in Cartagena, Colombia, a sexy mestizo woman seemed to be giving me some action.

What stands out about my Latin-American trips is once people recognize me as an American visitor, and not a black local citizen, all perceptions change.  To many Latin-American women, I'm not necessarily exotic because I'm black, but because I'm a gringo. One woman whom I just met begged me to bring her back to the USA.

During my travels, I generally shy away from relationships and stick to my original purpose—cultural immersion, the development of my Spanish, and that of lifetime friendships. If a love connection were to develop from there, fine. However, when a woman takes an immediate interest in me, I need to look at the motive. Is it a real attraction or does she want what's in my pants (wallet)?