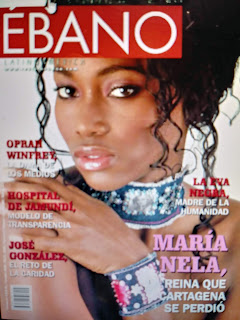 When I was in Cartagena, Colombia, I could not resist bringing back this souvenir I accidentally found in a black business: South America's EBONY MAGAZINE. Colombia has the largest Spanish-speaking black population in Colombia.

What's weird, a Colombian woman whose race is unknown, wrote on one of my blog posts that we Americas make too big of a deal about race.

However, she gave me a deafening silence to something that I pointed out about her country. In a predominately black and brown city like Cartagena, why are there little or no black employees working in businesses, banks, office buildings, and on the police force? Is it racial discrimination?

Colombia, like most Latin American countries deny racism in their country. It is indeed there, they just try to sweep it under the rug.
Posted by W Bill Smith at 3:45 PM