English and Spanish and Stereotypes

One afternoon, on an elevator in my office building, I tried to strike up a Spanish-speaking conversation with a gentleman wearing a traditional Mexican outfit. Looking me up and down with contempt, he asked me in perfect English, "what, you're learning Spanish?" After motioning for me to bug off, he stepped onto his floor visibly agitated. I'm thinking, damn , what is "his" problem?

Ever since I was a child, I've always thought it was so cool to speak a second language. Because I lived around so many Puerto Ricans in New York City, Spanish was the most logical choice. However, as I began teaching myself Spanish out of a library book, I became flustered when my Puerto Rican neighbors and schoolmates consistently answered me in English (New York accents).

This frustration followed me all the way into my adulthood. I began thinking; perhaps, Latinos were ashamed of being Latino and simply wanted to assimilate into American society forgetting their language and culture. Finally, I began asking Latinos friends for the real story. Their answers varied. Many do not want to be stereotyped as Spanish-only or illegal immigrants. Others might get a sense that their English is better than my Spanish, thus would find it easier to answer me in English. And there was one response that made the greatest sense of all; if they are learning English, they needed to speak English in order to reach their desired level of fluency.

The big shocker, speaking of stereotypes, is that there are Latinos growing up in the U.S. whose Spanish is limited, and do not feel comfortable speaking Spanish unless they are talking with a monolingual Spanish speaker, preferably a relative. And there those who don't speak Spanish at all. 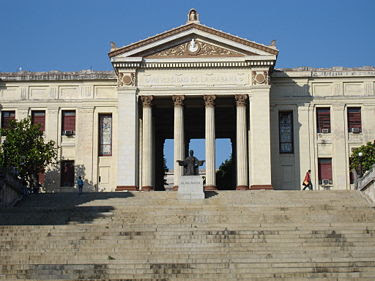 The University of Havana, Cuba, where I took Spanish language intensive training.
For these reasons, I chose to get out more. I mean, out of the country. My first experience of Spanish language immersion out of the country was in Cancún, México where I had a 24-hour layover before my next flight to Havana, Cuba. In Cancún, everyone was pleased that I was speaking Spanish; the people at the airport, the cab drivers, the hotel clerks, and the restaurant workers. By the time I arrived in Cuba, I was warmed up. In Cuba, I was taking a Spanish intensive course at the University of Havana through the Global Exchange organization based in San Francisco. Global Exchange sends Americans to Cuba for various programs such as language, music and dance, and bicycle tours. 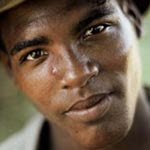 One day, a Cuban citizen struck up a conversation with me in English. My mind flashed back to the gentleman on the elevator thinking he may have felt stereotyped and wanted to put me in my place. Well, I began to feel the same sense of indignation with this Cuban stranger assuming I’m an English-only gringo. I was gritting my teeth, saying to myself that I’m going to teach his young, narrow ass a lesson. For everything he says in English, I will respond in Spanish. Now, I’m getting a taste of my own medicine; how Latinos in the U.S. may feel when I speak to them in Spanish versus English.

As I kept answering in Spanish, he finally declared his frustration and demanded that I let him practice his English. Again, my mind went back to all the Latinos in the U.S. with whom I tried to practice my Spanish. I don’t know if I would have demanded that they'd let me practice for that is not my personality, but asking their permission and explaining why would have been a much better approach.