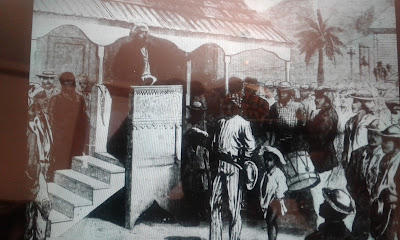 Frederick Douglass addressed a crowd of 200 African-Americans who migrated to the Dominican Republic, January 28, 1871.

*****
The Samaná Province in northeastern coast of Samaná Bay in the Dominican Republic is a destination for nature lovers, honeymooners, and whale-watchers.

The Samaná Province is also home to what is known in the Dominican Republic as Americanos de Samaná (Samaná-Americans) where descendants of free black Americans immigrated beginning in 1824. They took advantage of the pro-African immigration policy when Samaná was under Haitian rule.

This migration to Samaná began with 34 African-American families that distinguished themselves from the rest of the Dominican Republic as they maintain many elements of 19th century African-American culture, such as their English, food, games, community organizations as well as African-American names, manners, music and some recipes that have been preserved. Most are of the African Methodist Episcopal and Wesleyan faith.

So many free Blacks moved from the United States to the Dominican Republic, not only because of the weather and beautiful beaches, but to get away from a racist society. Today, it is estimated that 80% of the population in Samaná, Dominican Republic is of African-American descent.

While it is difficult to estimate the number of Samaná Americans today due to intermarriage and emigration from Samaná, the number is estimated to be around 8,000.

There are no monolingual English-speakers anymore; all Samaná-Americans are bilingual—English and Spanish. As a result of the influence of mainstream Dominican culture, including compulsory Spanish-language education, many of the old markers of African-American culture are gone.

Comparatively speaking, these Black folks succeeded in escaping racism. Blacks in the other parts of the Dominican Republic are looked at as having a lower social status than the lighter skinned and the more stereotypically Spanish looking people.

This is even more prominent closer to the Haitian border because of Dominicans' dislike of Haitians who are mainly of very dark skin. But all the way across the island, in Samaná, almost all of the people who live there are very dark skinned as well where their skin color is not an issue.