Visiting the Center-of-the-World; the Equator (Ecuador) 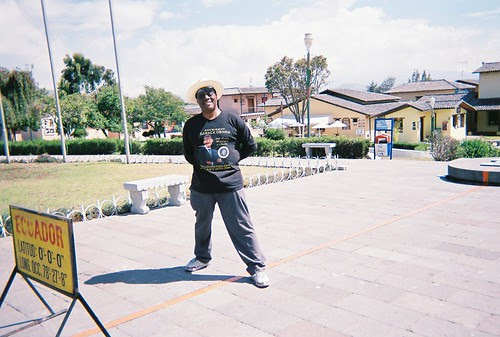 Standing on the equator, which is English for 'Ecuador,'  with one foot in the Northern Hemisphere and the other foot in the Southern.

As a rule, when I travel, I avoid the tourist areas and as much as possible try to mingle with every common people of the country that I'm visiting; especially in a Latin American country. This is for the purpose of being totally immersed in the Spanish language and the cultures. And as Juan, a friend from Venezuela told me, the barrio (the hood) is where the real culture is. I believe it! However, when I visited Ecuador, I could not resist wanting to have my picture taken with one foot in the Northern Hemisphere and the other in the Southern.

Gloria, whom I met through a friend on Facebook became my friend and guide. We caught a bus in downtown Quito for a 40-minute ride to La Mitad del Mundo (the Center of the World), a major tourist attraction with restaurants, a planetarium,  a monument museum celebrating Ecuador's cultural diversity, including Afro-Ecuadorian, and plenty of shops selling souvenirs competing for tourist business. On weekends, there is a musical entertainment

Being that the equator runs through the Andes Mountains, it was not very hot. In fact, I was very comfortable wearing a long-sleeve shirt. It was so windy that my brand new panama hat I just purchased was blown off my head more than once.