Hugo Chavez and the Black Community 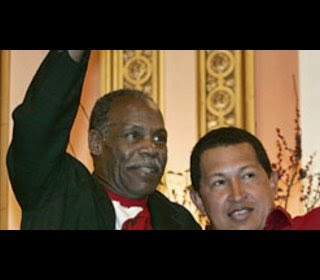 “The U.S. media's portrayal of Venezuela "has nothing to do with reality.”
-- Actor Danny Glover

While planning my trip to Venezuela, I had planned on making it plain to immigration and others I meet upon my arrival my admiration for Hugo Chávez. I was then warned, not only by the travel guides I was reading but in my communication with Venezuelans in a couple of online forums. They stated that comments for or against Chávez, depending on who you are taking to, can be very touchy. Of course, the same could be applied here in the US when it comes to politics, which is one of the reasons I generally do not discuss politics, especially with strangers. However, the predominately Black Region of Barlovento in Venezuela, where I visited, is a known Chavista (Chávez supporters) stronghold.

Hugo Chávez however, the lateVenezuelan president, has boldly sought to forge ties with poor communities of color in the United States. In the wake of Hurricane Katrina, Chávez provided relief assistance to the poverty stricken and largely African American victims of that disaster. The head of Citgo, the U.S. subsidiary of Venezuela's oil company, set up disaster relief centers in Louisiana and Texas in the wake of the hurricane and provided humanitarian relief to thousands of victims in terms of medical care, food and water. Chávez expanded his program to the predominately African-American and Latino South Bronx. While in New York, Chávez toured the poorest congressional district in the nation's richest city, the South Bronx, and was treated like a veritable rock star.


Hugo Chávez himself is of mixed racial roots. In an interview, Chávez remarked that as a young man applying to the military academy, he was wearing an Afro and has not sought to distance himself from his ethnic heritage. His Indegenous roots are from my father's side who is also of mixed African heritage. Like many other Venezuelans of color, Chávez grew up in poverty as a farm kid from the plains." Chávez entered the military, which historically has been one of the few paths towards social advancement for men of color. While on duty, he toured the country and became aware of economic exploitation and racial discrimination.


As Afro Venezuelan groups celebrated the 150th anniversary of the end of slavery in Caracas, Chávez made an appearance and some participants expressed optimism that racial progress would be made under the Chávez government. The TransAfrica Forum sent a delegation of influential African-American artists, actors, activists, and scholars to Caracas to meet with government officials. The group included screen actor Danny Glover who expressed his excitement at the social changes taking place in Venezuela. Glover remarked that the U.S. media's portrayal of Venezuela "has nothing to do with reality." Glover and others presided over the inauguration of a new "Martin Luther King., Jr." school in the coastal town of Naiguata. The area is home to large numbers of Venezuela's Black community. The school inauguration was the first official Venezuelan recognition of the importance of the slain civil rights leader.

Meanwhile, Chávez has cultivated ties with civil rights leader Jesse Jackson. Speaking later at the National Assembly, Jackson discussed the role of Martin Luther King Jr. during the civil rights struggle. Jackson praised Venezuela for making slavery illegal prior to the United States. "You in Venezuela ended the system of slavery in 1854," he remarked (the US ended slavery in 1865). At the end of his speech Jackson was cheered with thunderous applause from Venezuelan lawmakers.