Is There a Black Granny in Their Closet 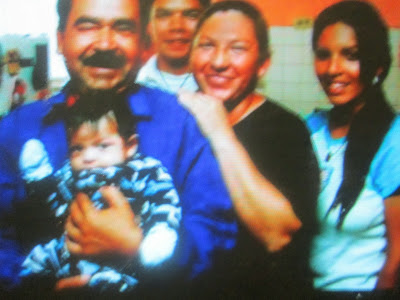 It was in the fall of 2009, when I crossed the border from Ecuador into Perú, and was aggressively stopped by a suspicious Peruvian National Police officer. After he thoroughly checked my documents, he followed up with the routine question, “¿que hace usted en Perú (what are you doing in Perú)?” I explained to the officer that as hobby, I explore black cultures in Spanish-speaking countries, and that I am on my way to El Carmen, the hub of Afro-Peruvian culture, to stay with the Ballumbrosio family, the well-known musical family in the Afro-Peruvian music industry. The officer, now much calmer, seemed to be truly “feeling” me; in other words, very understanding and appreciative of what I was doing. You can't tell by looking at him, but who knows? He himself may have an Afro-Peruvian granny or grandpa in his family tree.

Elena, an Afro-Ecuadorian friend who showed me around her city of Quito, Ecuador, has two interracial children by a white man, and those two children themselves got married to Europeans; one German, and the other Dutch. And from looking at those children, you would never know that they are of African heritage.

All of this could be by design because it has been brought to my attention that a lot of Latin Americans combat racism through what is known as blanquemiento, that is to slowly, over generations, whiten the population through intermarriage, or through a practice called mejorar la raza, “improving the race” by which many blacks reject other blacks as potential mates and seek someone white or much lighter in complexion for marriage and childbearing. What I myself found so weird during my Latin American travels is that while I’m looking and admiring the sistahs (black women), it was generally the white and mestizo women who were looking and admiring “me.” A couple of these women even talked about setting me up with one of their friends.

I saw quite a few brown people with black babies and black people with brown babies. Many of these blacks who intermarry feel that their children will have better opportunities when they come of age because darker skinned people are restricted to working in certain types of jobs such as nannies and security guards. In Cartagena, Colombia, where I visited in 2010 for example, a city heavily populated with blacks and browns, I went into a bank and noticed that all of the employees were lily white, only the security guard was of color, and he himself was of very light complexion.

Many Latin Americans with black grannies and grand dads do not even acknowledge that part of their bloodline, and their children and grandchildren often have no clue that they have actually have an African connection. Then there are others, like Damisa, an extremely light-skinned 18-year-old daughter of a black Peruvian woman and an absent white Peruvian father who not only acknowledges her African heritage, but is attracted to black men. She speaks good English and embraces the African-American hip hop culture as if it were her own. As a friend of the family, however, I’ve tried to caution her about using that N-word, trying to act ghetto; and mimicking the buffoons she sees on rap videos. Hopefully, she will grow out of that, because as far as I’m concerned, she went off on another extreme.