UPDATE: I Stepped Away from my Beloved Afro-Peruvian Godchild 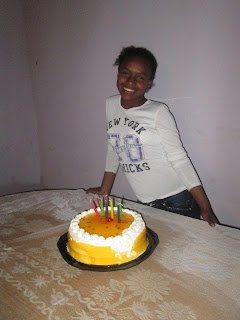 My godchild on her 11th birthday


The downside of traveling to developing countries like Perú and getting too close to the people is that many will think that you are in the same economic bracket as Donald Trump and will often hit on you for money. Merchants and cab drivers will charge you higher than what is normal (the gringo tax) if you unaware of the appropriate costs and don't call them on it.

I used to buy my goddaughter Daniela of El Carmen, Perú nice things, like bicycles and games to help her enjoy her childhood, but her mother took those nice things from her when I was away and sold them for profits. When Daniela reached the age of nine her mother and other family members use her for no other purpose than to hit on me for money.

After my blog post published on December 10, 2016, Thinking of  Stepping Away from my Beloved Afro-Peruvian Godchild, and the thought I put into that post along with the feedback that I received from my readers, I decided to actually step away from the father-son relationship that I had with my 14-year-old goddaughter. However, Daniela and her sister continued trying to communicate with me on Facebook. After three or four weeks of ignoring them, Daniela posted this message on her timeline:


Mientras tú me ignoras, otros me enamoran!!!!
(While you ignore me, others love me)


I knew that she was talking to me and I felt hurt because I imagined that she may have been hurt by my appearance of neglect. However, after a few days of mulling over the message in her post, I had to give her a piece of my mind. Thoughts that I have been carrying for the last six years.

I sent Daniela a message in Spanish to her Facebook inbox that I really do love her, but she does not love me. I am only a money box for her, her sister, and her mother. Nothing more. I explained that when she was five, six, seven, and eight years' old, I felt her love, but afterward, I felt nothing and it hurt.
She acknowledged that I am right and that she will talk to her mother. It is her mother and her sister who I feel are behind Daniela's sudden distant feelings towards me breaking up the bond that she and I developed. It has been a week or two since Daniela and I had this communication and, to date, I have not heard back from her. “Nuff said!”
Posted by W Bill Smith at 5:16 PM