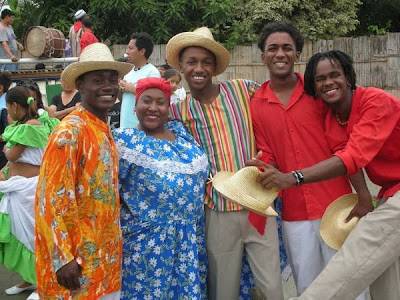 In an effort to raise awareness of Afro-Ecuadorian culture as well as political and economic issues, Black communities in Ecuador organized the Afro-Ecuadorian Cultural Week in Quito, the nations capital, in October 1997. That same year, the Ecuadorian National Congress declared October 2 to be the National Day of Black Ecuadorians. During the festival, leaders introduced a proposal to improve the economic, political and cultural status of Ecuador's Black communities.

Slave ships first arrived in Ecuadorian ports in 1553 for work on plantations and in gold mines. Although slavery was abolished at the time of Ecuador's independence from Spain in 1822, the descendents of enslaved Africans continued to suffer the consequences of that socio-economic system. One of the first Afro-Ecuadorian organizations, Asociacion de Negros Ecuatorianos (Association of Black Ecuadorians), was founded in 1988 to reassert Afro-Ecuadorian dignity.

In 2006 the existence of Blacks in Ecuador was brought to center stage when it was revealed that two-thirds of the Ecuadorian World Cup soccer team was of African descent.

According to the 2001 census, Afro-Ecuadorian population is 604,009, or 5 per cent of the total population. However, Afro-Ecuadorian organizations argue that this number is inaccurate due to problems with self-classification (there are Blacks who don't consider themselves Black). They estimate Ecuador's black population at ten per cent, living mostly in the northern coastal province of Esmeraldas and in the south-central coastal region. About two-thirds of Afro-Ecuadorians now live in urban zones. Although Afro-Ecuadorians have distinct cultural traditions, there is little recognition of their contribution to Ecuadorian society. In 1998, a government agency was created to address issues facing the Black population. In 2006 the existence of Blacks in Ecuador was brought to center stage when it was revealed that two-thirds of the Ecuadorian World Cup soccer team was of African descent. This was the first time in history that Ecuador qualified for the World Cup.

Black activists have been effective in advocating for rights for Black Ecuadorians as well as raising consciousness among this group. Key umbrella organizations such as the National Afro-Ecuadorian Confederation and the National Coordinator of Black Women have had a presence in domestic politics as well as international policy circles. Afro-Ecuadorian women's organizations have been particularly effective, raising other important issues to address the specific concerns of black women. This has included the elaboration of innovative programs related to health, violence, work conditions, and self esteem among Afro-Ecuadorian women.