A Little Taste of Caracas 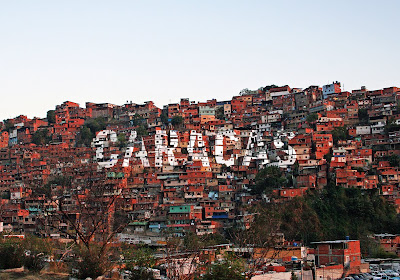 I've always wanted to visit Venezuela after reading the book entitled Africa in Venezuela by Jesus “Chucho” Garcia. As many African-Americans know, Carter G Woodson is the father of Black history in the US. Well, Jesus García is the father of Black history in Venezuela. My opportunity to visit Venezuela came in December of 2011. However, as I was planning my trip, my co-worker León who is from Venezuela's notorious capital city of Caracas, discouraged me from going saying that it is too dangerous. I explained to León that I wanted to spend my vacation in the Region of Barlovento, the hub of Afro-Venezuelan culture, and not Caracas. León insisted that every corner of Venezuela is dangerous. I asked him that if I could pass as a poor, unemployed, Black Venezuelan would that make me safer? He laughed and said no, thugs do not discriminate when choosing their victims! 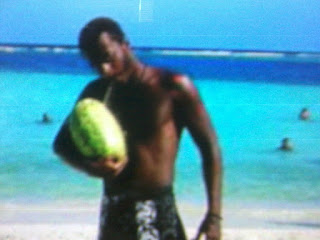 Felix, a Venezuelan friend and guide
I met on couchsurfing.com

As I set about to do my homework on Venezuela, reading travel guides and doing web research, and joining message boards, like I do prior to every trip that I take, I learned that the crime statistics in Caracas, especially in the barrios (the hoods), which are located in the hills, would make the worst gang-infested cities in the US appear like havens of rest. One Venezuelan in an on-line forum told me that if I even think about going  into one of the barrios to make sure I bring an Uzi. León used to simply look at me with sad eyes as I continued to plan my trip, but as time passed, he began to feel better and more confident about my ability to handle myself as I kept him advised of all of my preparations. I even downloaded over 100 Venezuelan slang words to incorporate into my vocabulary, like epa, primo (what's up bro, or what's up, cuz)? León finally told me that I was ready. As in all of my travels, I made Facebook friends to establish warm contacts in advance of my arrival. However, my best and most rewarding efforts came through couchsurfing.com, a web site where travelers can get inside information on a country from local citizens, and even arrange for free accommodations and tours. 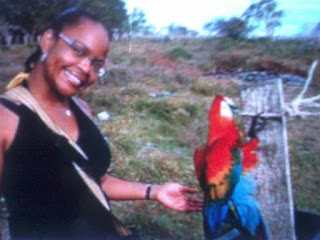 María, a Venezuelan friend and guide
I met on couchsurfing.com

There was Felix who picked me up at the airport and showed me around Caracas before taking me home to meet and dine with his family and fiancee, and gave me a free place to sleep for the night. He also made arrangements for me to change my American dollars into two times the normal exchange rate giving me far more spending power during my five days in the country. Knowing that I wanted to go to Barlovento, the hub of Afro-Venezuelan culture, he texted María, another person whom I met on couchsurfing.com who has family in that area, and turned me over to her the next day. María herself took me around town as we wined and dined before finally taking me to the biggest and 'baddest' hood in all of Caracas, Barrio Petare. This was the place to catch my bus to Venezuela's Region of Barlovento.


All in all, I spent a total of three days in Caracas and found everyone I encountered to be cordial and helpful. I did not come close to experiencing or even observing any of the dangers I heard and read so much about. Sure, I met some slick hustlers, but after having grown up in New York City, that didn't phase me. At the airport, where I was warned to be careful, I got burned for about $30 American dollars by some sweet looking men and women roaming the airport selling CDs of Venezuelan music of which I purchased as souvenirs before catching my flight out. When I got home, I learned that those CDs were either blank or of very poor quality. León, however, was so happy that I made it back to work alive and in one piece. He was pleasantly surprised and delighted that I had such a wonderful and memorable time. My little taste of Caracas was truly an answer to prayer.
Posted by W Bill Smith at 12:00 AM